Kicking off what’s set to be a busy May, this morning the Video Electronics Standards Association (VESA), the PC display industry’s primary consortium, is rolling out a new set of performance standards for variable refresh rate displays. Dubbed AdaptiveSync and MediaSync, these new test standards are designed to offer an industry-neural and open specification for the behavior and performance of DisplayPort displays. AdaptiveSync is a standard designed for high-end gaming displays, while MediaSync is aimed at eliminating video jitter on a much wider array of devices.

And while the introduction of Adaptive-Sync greatly increased the number of monitors with variable refresh rate capabilities on the market, it hasn’t been an entirely smooth experience. AMD was an early promoter of the technology with their Freesync initiative, which essentially piggybacked their own promotion and certification program on top of Adaptive-Sync, but also muddled some things with a Freesync HDMI standard and a weak base certification. Meanwhile NVIDIA was quite late to the game, although they did finally embrace support for the VESA standard in 2019 – adding Adaptive-Sync support alongside their existing proprietary G-Sync standard. But even after this, it’s left AMD and NVIDIA dueling to an extent with different standards and certification processes (and Intel looking at as odd man out).

All the while, Adaptive-Sync-capable displays have been hit and miss, with a large variety in supported refresh rate ranges and a lot of inconsistency in how well variable refresh actually worked. Even today there are still displays that support variable refresh rates but deliver a subpar experience when doing so. All of this has hurt VESA’s efforts to promote the adoption of Adaptive-Sync technology, and ultimately for variable refresh displays to proliferate and be used to solve issues such as frame jitter.

To that end, today VESA is stepping in and will be taking on a much more active role in the standardization and marketing of Adaptive-Sync monitors. Recognizing that supporting the Adaptive-Sync feature alone is not enough, and that a good experience with a variable refresh rate monitor also requires boundaries and minimums in terms of performance, the group has put together two new logo programs to certify the performance of Adaptive -Sync displays. Or, as the group likes to put it, these new programs set standards for “front-of-screen performance”.

The primary purpose of these new logo programs is to help buyers identify monitors that proficiently implement Adaptive-Sync. There is also a secondary purpose of helping VESA’s member companies clearly communicate to those buyers that their variable refresh rate monitors are, to put it politely, legitimately good, since implementing Adaptive-Sync doesn’t come with any quality guarantees. This course is an area that both NVIDIA and AMD have a hand in, with their G-Sync and Freesync certification programs respectively, with a mixed history of results thanks to multiple standards and the use of proprietary technologies. Consequently, VESA wants to do what neither of them already do in making a set of open standards that aren’t tied to a specific manufacturer, and rely purely on DisplayPort’s Adaptive-Sync technology.

VESA, in turn, is essentially going to be tackling the subject from both ends of the spectrum. At the high-end will be the new VESA Certified AdaptiveSync display standard, which is designed to be a conformance standard for high-end gaming displays and has some very tight requirements to match. At the other end of the spectrum is VESA Certified MediaSync, which is a far simpler specification aimed at flagging displays that offer basic and effective variable refresh rate support for media consumption purposes – and with no emphasis on gaming whatsoever. In practice, AdaptiveSync is a superset of MediaSync, so while both standards exist on the market you won’t see displays that are logo’d for both; if a display meets AdaptiveSync standards, then it’s more than good enough to also meet the needs of media playback.

AdaptiveSync: LFC, No Flicker, and No Shenanigans

We’ll start things off with a look at the high-end AdaptiveSync display standard. Designed for gaming displays (or more specifically, “gaming frame rates”), AdaptiveSync is a conformance test that takes a look at a number of factors. Not only are basic features such as refresh rates defined in the standards, but also standards for flicker (or rather the absence thereof), dropped frames, jitter, pixel response times (G2G), and ghosting / overshoot / undershoot. Short of HDR functionality (which is a whole other kettle of fish for numerous reasons), AdaptiveSync covers all the relevant requirements for a high-end gaming display.

All of which has come as a bit of a surprise to me. When VESA first informed me that they were working on a quality standard for variable refresh displays, I will freely admit that I was skeptical. The consensus-driven nature of the group means that VESA performance standards have at times been held back by the need to please hardware manufacturers who want to have many (if not all) of their products meet a new standard. This has most explicitly been the case for DisplayHDR certification, which although technically sound program at the higher tiers, is harmed by the existence of the DisplayHDR 400 tier, making DisplayHDR certification on its own kind of meaningless. 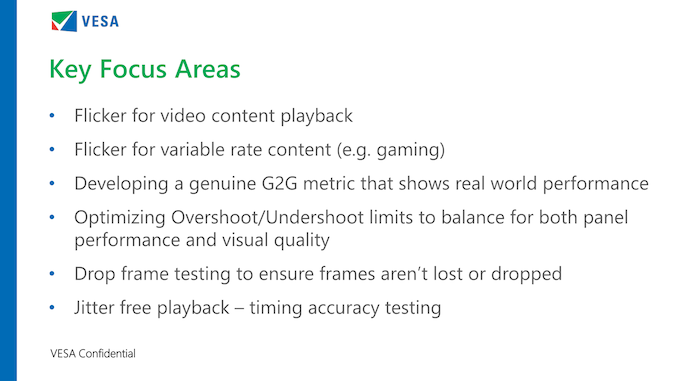 This is clearly something VESA has taken to heart, as, much to my surprise, AdaptiveSync isn’t making any such compromises. Instead, the group has gone all-in on developing a high-end specification that isn’t watered down to encompass or qualify more basic displays. As a result, most Adaptive-Sync-capable displays on the market right now will not meet AdaptiveSync display standards, and even most gaming displays are likely going to fail as well. VESA set out to create a high-end standard, and they are clearly sticking to their guns on the matter to the very end.

And to be sure, the AdaptiveSync display standard is merely a performance standard – it does not define any new technologies. So the standard can be used to test and certify existing PC monitors, integrated displays (AIO PCs), and laptop displays, so long as those devices are hooked up via a DisplayPort / eDP standard. It should be noted that this technically means the AdaptiveSync standard only applies to the DisplayPort input on a device and not the HDMI inputs. But, as 99% of the hard work in delivering a good variable refresh rate experience occurs under the hood with components like the TCON and backlight, I would be surprised to see this be an issue.

Diving into the AdaptiveSync display standard itself, VESA has started things with significant refresh rate requirements. A compliant display needs to support a variable refresh rate range of at least 60Hz to 144Hz – the minimum, magical 2.4x range needed for low framerate compensation (LFC) support. Displays can go below this for the minimum (eg 48Hz) and above that for the maximum (see: 360Hz displays), but 60-144 is the smallest range that qualifies. And it must be out of the box; displays that need to be “overclocked” in any fashion to meet the minimums will not quality. That goes for all testing, in fact, as AdaptiveSync certification testing is conducted with monitors running at their native resolution and set to their default, out-of-the-box configuration.

Along those lines, VESA is also testing for dropped frames, as there have apparently been some monitors that are accepting more frames than they can actually display. As a result, the conformance test looks for dropped frames both at fixed and variable refresh rates, to ensure every frame is being displayed.

Flicker: Testing Min to Max, and Everything In Between

The second major focus area for the AdaptiveSync conformance test is display flicker, which essentially covers a whole suite of display and backlight anomalies that can occur with variable refresh rate displays. Using a dedicated probe (presumably a photodiode), VESA’s testing regime looks for evidence of visible flicker, with a technical requirement of no more than -50 dB of flicker no matter the refresh rate. Here VESA is relying on the Japan Electronic Information Technology Association’s (JEITA) existing perception-based method for calculating flicker, which is weighted to look at the frequencies human eyes are most sensitive to.

The test, in turn, breaks things up into looking for flicker at common frame rates / refresh rates for media (23.976fps / 71.928Hz, etc) and at the panel’s minimum refresh rate, as well as running several tests for flicker in full variable refresh rate scenarios, where the refresh rate is changing from frame to frame. 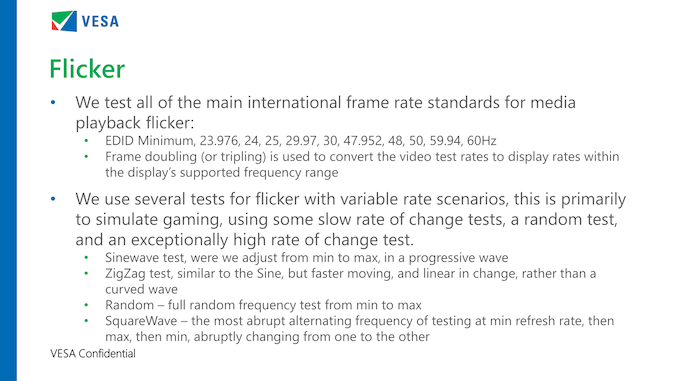 The conformance test for variable refresh mode relies on four refresh rate patterns in order to ensure displays can properly handle both slowly and quickly-changing refresh rates. Those patterns are a sinewave, a zigzag pattern, a square wave, and finally a full random test. According to VESA, the square wave test in particular is especially brutal since it calls for rapidly switching between minimum and maximum refresh rates. The random test is also quite capable of tripping up monitors, since it can have displays switching to significantly different refresh rates in one go, instead of smoothly ramping up or down.

And while the AdaptiveSync display conformance test doesn’t have an explicit test for backlight or gamma flicker (a somewhat common problem in early Adaptive-Sync displays), according to the group, they believe their flicker test should be sensitive enough to pick up on those specific phenomena.

iPhone prices may rise outside US; bad timing for iPhone 14