Twitter’s adding some new ways to promote Spaces usagewith new Spaces buttons within the tweet composer and retweet flow, which could see more users launching topical discussions in the app.

As you can see in this example, the new Spaces button in the tweet composer will allow you to launch a Spaces broadcast instead of tweeting your thoughts.

You’ll also now be able to start a Space from the retweet menu, which will skip the usual set up process and immediately take you live, with the tweet automatically being pinned at the top of the Space. 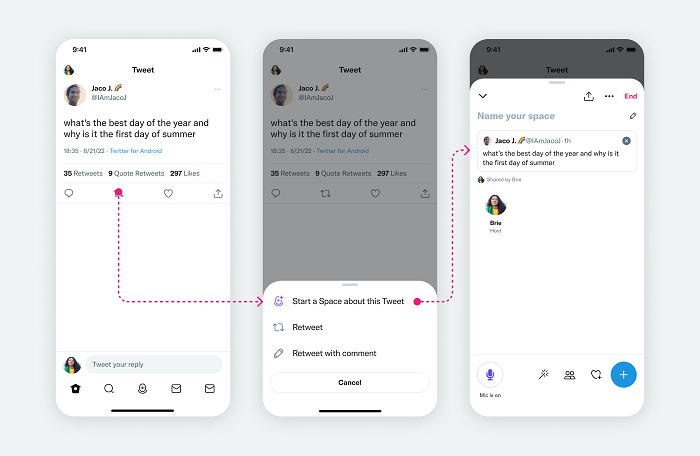 Twitter’s also testing a new way for hosts and speakers to share Tweets in a Space via the Retweet menu, providing another way to add context to your audio chats. 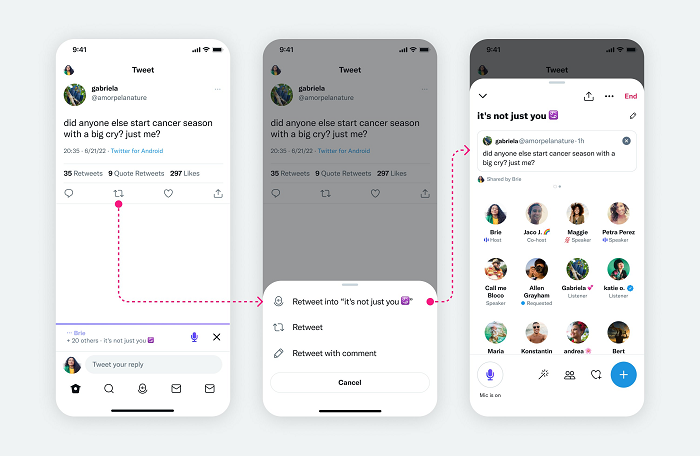 The options provide more streamlined avenues into audio chats, which could get more people at least considering launching their own discussions.

Or not. It’s hard to say if they’ll actually catch on – which really also applies to Spaces more broadly, as a function within the app.

It seems like so long ago when people were clamoring for Clubhouse invites, with every regular chump feeling left out of the loop, as celebrities broadcast their exclusive audio sessions in the app.

The social audio boom was short-lived, but powerful, with many investors and tech enthusiasts espousing the medium as a ‘game changer’ for digital interaction.

Of course, like most game changing features, it wasn’t, and as more people got access, and more apps added similar audio room features, the overall quality of the dipped experience, which made it harder to find good audio rooms.

Then people stopped listening, and while there are still passionate social audio fans, and great broadcasters on Clubhouse and in Twitter Spaces (and in Facebook’s audio rooms and Reddit Talk), most have now moved on to the next thing.

Which doesn’t bode well for Twitter Spaces, which only really seemed to latch on to the tail end of the Clubhouse-led craze. Now, it’s hard to find any ‘big’ Spaces broadcasts, with lots of listeners and engagement. It’s mostly just NFT acolytes and crypto scammers – and for most users, there’s nothing really worth tuning in to most of the time.

Or Twitter’s not great at highlighting relevant broadcasts, based on each users’ interests. Either way, it doesn’t seem like Spaces is on track to become a thing in the app, which Twitter itself has alluded to in its public statements.

So why add these updates, like they’re going to play any big role in making Spaces more relevant?

Honestly, I’m not sure that Twitter has a heap of other tricks up its sleeve to improve engagement, and given the real-time nature of discussion in the app, Spaces should fit, it should be a good complement to trending tweet interaction.

It should work, but Twitter needs more people broadcasting – and maybe, by making it a more upfront option within the tweet process, that can still happen, and Spaces can still become a bigger part of the experience.

But I suspect Twitter’s nearing the end of its roadmap for Spaces integration, and additions like this are a last roll of the dice to make it happen.

That doesn’t mean that Twitter will retire the option if this doesn’t boost take-up, but I do think that Spaces development could go quiet in the near future, ahead of an eventual removal of the Spaces tab sometime next year.