Twitter has today launched the first stage of live testing for what’s arguably the most requested social media platform addition of all-time – the ability to edit a tweet after posting.

As you can see in this example, edited tweets will include a note at the bottom that it has been edited, while all users will be able to access tweet edit history by tapping on the pencil icon.

Which should alleviate some concerns around potential misuse of the option – although many people are already sounding the alarm on possible damages that could be caused by revised tweets.

So how will it work?

Initially, Twitter says that it’s launching a test of the feature with internal staff, before expanding the test pool to Twitter Blue subscribers ‘in the coming weeks’.

“For this test, Tweets will be able to be edited a few times in the 30 minutes following their publication. Edited Tweets will appear with an icon, timestamp, and label so it’s clear to readers that the original Tweet has been modified. Tapping the label will take viewers to the Tweet’s Edit History, which includes past versions of the Tweet.”

So tweet editing won’t be available indefinitely, but for a limited time after posting, which aligns with an earlier tweet editing proposal that former Twitter CEO Jack Dorsey flagged back in 2016.

After that, however, Dorsey and Co. poured cold water on the idea, several times, essentially saying that it would never happen.

But now it is. Take that beardy man.

So, there it is – tweet editing, the long-awaited, much-requested, savior of tweet engagement, is now here. Or, at least, it’s coming, if you don’t want to pay $4.99 per month for Twitter Blue. 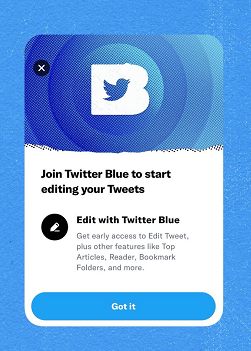 Incidentally, Twitter announced a 67% price increase for Twitter Blue subscriptions back in July, likely in preparation for the influx of interest it’ll receive as a result of tweet editing becoming an add-on option.

That could see overall Blue revenue jump as a result, which would help bolster Twitter’s coffers ahead of its court date with Elon Musk.

Really, though, on balance, it doesn’t seem like it’s going to be the game-changer that many expect.

It’ll be a handy addition, no doubt, especially when you see that dopey typo that you just made in that witty response you posted to a viral tweet. In those instances, it’ll be helpful, but the true impact likely won’t be massive.

It’ll be hyped up, people will be excited about it for a few weeks. Then, I’m guessing that it’ll just become part of the normal tweet process.

Part of Twitter’s logic for not simply releasing it to all users would be that hype cycle, and the capacity for it to jolt interest in Twitter Blue. Twitter says that it’s keeping the test pool small to begin with so that it can ensure that there are no problems with the system, but traditionally, such tests have been conducted in specific regional markets first, as opposed to being allocated to paying customers.

It’s pretty clearly a money grab in this instance – but as noted by Adam Moussa:

Of course, some people will – heck, some people are paying for Twitter Blue right now just so they can display their own profile picture, which they’ve registered as an NFT, in the hexagonal NFT profile frame. 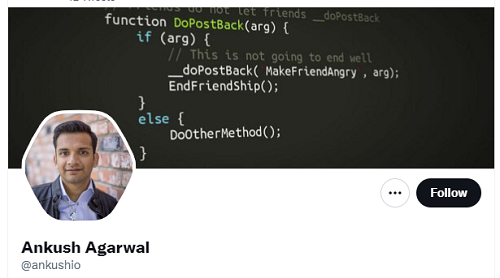 Like, just use your original photo, and save five bucks a month.

There are, of course, other reasons for signing up for Twitter Blue (not many), but the point is that people will pay, and they will be eager to get first access to the option, which will subsequently give Twitter Blue a boost.

But at the same time, there are also concerns that the option could lead to issues.

Some have suggested that the ability to edit tweets will enable scammers to insert phishing links into viral tweets, or to incorporate political messaging into already amplified messages.

Those same concerns would also, theoretically, relate to popular posts on any social app, most of which have offered editing options for years – but on Twitter, this is considered to be more of a potential issue due to the concise nature of tweets, and the capacity to significantly alter a tweet’s message with even the smallest of edits.

I don’t know that, in reality, this will be a major issue – one, because of the 30-minute time limit, as noted, but also, because once the novelty wears off, it’ll become commonplace pretty quickly. Really, if you were going to use the edit option for ill purpose like this, you would essentially have to plan to create a viral tweet, which you could then edit quickly – and as all social media managers know, planning a viral tweet is pretty close to impossible.

And that’s for social media managers that tweet every day. I can’t imagine scammers, who often struggle to put a cohesive email together, will be so capable in this respect.

But we’ll see – while Twitter also notes that the option could help to ‘take some of the pressure off Tweeting, especially for people who don’t Tweet as often’.

“This is one of many features we’re exploring to help people join the global conversation on their own terms.”

Will you be paying $5 a month to try it out?

Really, I’d be more inclined to pay for this service:

Either way, tweet editing is here. Rejoice, cringe or clutch pearls as you see fit.

Choosing the Best Mac for a College-Bound Student in 2022

LinkedIn Shares New Data on the Most In-Demand Skills, New Notifications of Opportunities in Your Network

Intel And The Terrible, Horrible, No Good, Very Bad Day
19 hours ago