After testing them out in the live environment over the last six months, TikTok has today announced that it’s rolling out comment downvotes for all usersas a means to flag inappropriate responses to video clips.

As you can see in this example, TikTok’s ‘Thumbs Down’ comment downvote option will be displayed at the far right of each comment, providing a quick and easy way for users to tag such, in order to help TikTok identify negative behaviors in the app .

Which is the key focus – rather than being an audience response element, like downvotes on Reddit, TikTok’s approach is actually to use the indicator as a means to weed out negative behaviors.

As TikTok explained back in April:

“We’ve started testing a way to let individuals identify comments they believe to be irrelevant or inappropriate. This community feedback will add to the range of factors we already use to help keep the comment section consistently relevant and a place for genuine engagement. To avoid creating ill-feeling between community members or demoralize creators, only the person who registered a dislike on a comment will be able to see that they have done so.”

So dislike counts won’t be public, as they are on Reddit, with the purpose, again, being to help TikTok’s moderation team get on top of negative trends, as flagged by its users.

How it will likely work in this respect is that downvoted comments will be displayed to TikTok mods in ascending order, based on total downvote activity across the app, which will then enable them to wade through the list and pick up on rising negative trends, providing another way to detect and address such in their process.

That could also help to limit the use of the feature for ‘brigading,’ or using it as a means to launch targeted attacks on people or opinions based on alternative motivations. You can imagine how, for example, people might try to use this feature as a means to downvote conflicting political opinions into oblivion, but as the downvotes themselves don’t impact public display, and are only an indicator for TikTok’s moderation team, that’s less likely to become an issue.

Which would be part of the reason why TikTok’s comfortable pushing ahead with a full launch – and it may well be a good way to help keep things more civil, and more positive in the app.

TikTok actually first started its comment downvote experiment back in 2020with some researchers spotting the feature in early testing. 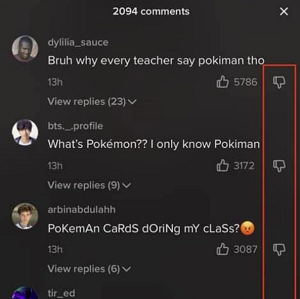 Both Facebook and Twitter have also been experimenting with comment downvotes for a similar purpose, not as a means to better surface or hide user responses, but to help identify negative behaviors based on what users think is bad, which effectively then helps to improve automated algorithms to detect such in future.

Which could be a better use of the option – though it is worth noting that Reddit’s public downvote system does help the platform highlight more relevant conversations and topics, based on actual responses from humans, as opposed to algorithmically identified trends that are guided by clicks, Likes, dwell time, shares, etc.

The problem with algorithmic trends is that divisive, negative content is amplified via this process, because sparking an emotional response, like anger, drives more people to comment and share. The algorithm then takes as an indicator that more people might want to see it, based on engagement response. The system itself has no way of determining the intent of the content, it only goes on binary signals – which means that triggering more reactions, however you can, is the best way to maximize exposure.

That doesn’t happen on Reddit, because such posts are quickly downvoted into the doldrums of the app.

Giving actual people the chance to drive exposure in this respect may be a more beneficial approach overall, but the bigger players will never go with it because it also makes users less likely to comment, likely because they’re also concerned about their own remarks being downvoted to the pit.

Previous analysis has suggested that more than 98% of Reddit’s monthly active users don’t ever post or comment in the appwhich is likely a key consideration that would limit take-up of such in other apps.

So they go with automated algorithms instead, which also then enables them to wash their hands of any responsibility for whatever type of content gains traction and doesn’t cross their networks.

Negative content drives more engagement, and thus, more reach in their apps? ‘We don’t know, it’s based on how users respond, factoring in all forms of engagement, so we’re not responsible for whatever that leads to’.

It seems that a human-moderated process, via public downvotes, could improve the flow of information in this respect. But the impacts on engagement could also be significant.

In any event, TikTok’s comment downvotes are not designed to help guide the conversation, and could be a valuable supplementary measure to detect rising negative trends.

TikTok says that comment downvotes are being released globally in the app from today.

How Brands Can Support Indigenous Communities on Social—the Right Way