Complaints posted online claim the recently released iPad Air 5 is so flimsy it makes a creaking noise when pressed.

But this is certainly not a cut-and-dried situation, because other iPad Air 5 users don’t have the problem.

iPad Air 5 so flimsy it creaks?

The reports of poor quality come from multiple posts on Reddit. One user says, “my Blue iPad Air 5 came in today and I am already sending it back: / Due to the aluminum being so thin and flimsy just a firm grip causes the panel to flex and the parts inside to wobble like a seesaw! ”

The device reportedly makes a creaking sound when pressed in the right place. Lewis Painter from Macworld UK posted a demonstration on Twitter. But it’s less of a creak and more of a click. 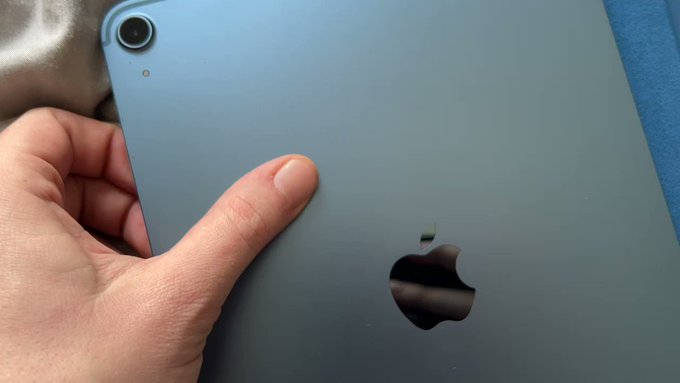 This is a bit surprising considering the new model is the 2020 iPad Air with a faster processor and few other component upgrades. The screen size and overall design didn’t change. Nevertheless, some users complain that the new model is flimsier.

As another Reddit post puts it, “The aluminum backplate is a lot thinner than on the iPad 4 which I also have. You can almost feel the battery through the plate when you hold the device. ”

Or maybe it doesn’t

There’s been some back-and-forth on the flimsy question because not every iPad Air 5 has the problem.

Lance Ulanoff from TechRadar has a unit to test, and he said:

“I grabbed the blue tablet, removed it from its Smart Cover, and started pressing the 0.24-inch-thick frame (the exact same thickness as the iPad Air 4). It is a rigid piece of metal and glass and resists bending even when you twist it. It feels solid and there’s no place where I can press it and feel, for instance, some sort of gap underneath.

“I absolutely don’t feel any components.”

Reviews of the 2022 iPad Air make no mention of the new tablet being flimsy.

One Reddit user whose iPad Air 5 creaks when pressed said it “makes me seriously doubt how long it will last for.” If previous iPad models are anything to judge by, there shouldn’t be any long-term concerns. Because, as Ulanoff points out, people have been complaining about iPad creak for at least four years.

Here’s a Reddit user reporting something similar about their iPad Pro 10.5, a model released in 2017. And a report from two years ago of “a clicking, creaking, or popping sound” is talking about a 2018 iPad Pro.

Apple makes iPads as slim and lightweight as it can because that’s what users want. And it seems one of the side effects is the tablets are not perfectly rigid. But this is not something new that affects only the latest model. And previous iPads have not developed a reputation for unexpectedly failing.

That said, anyone seriously concerned about the build quality of the iPad Air 5 should consider returning it. It’s a $ 599 product, after all.