After warning investors back in May that its results would be impacted by fast-evolving market conditions, Snap Inc. has today posted its Q2 2022 numbers, which show a steady increase in usage, but slower growth on the revenue side.

First off, on users – Snapchat added 15 million more users in Q2, taking it up to 347 million daily actives.

Although as you can see, a concerning element on this front is that Snapchat saw virtually no growth in the North American market, which is by far its biggest revenue driver.

Average revenue per user remains relatively low in other markets, especially in the ‘Rest of the World’ category, where Snap added the majority of its new users.

Snapchat has seen significant growth in India, where advancing mobile adoption and connectivity are helping it expand its reach and presence. Which is a positive for the app’s longer term growth plans, but it doesn’t provide a major boost for the app’s revenue right now, at least not in the way that adding users in the US would.

As such, the stagnation in US and European markets could be further cause for concern among investors – although Snap has also sought to restore its future-looking value via a new presentation on its expansion plans.

As you can see here, Snap’s touting its expanding reach, in many regions, as a key value proposition, while it’s also highlighted the importance of reaching this audience, based on key life milestones and related purchase activity. 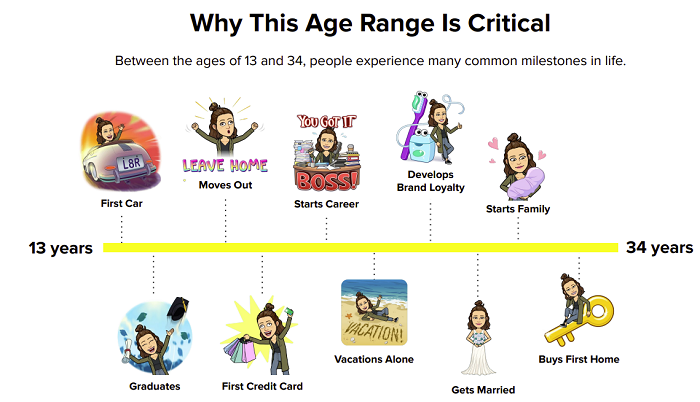 Which is important, because as noted, Snap’s Q2 revenue results have been impacted by shifting market conditions. 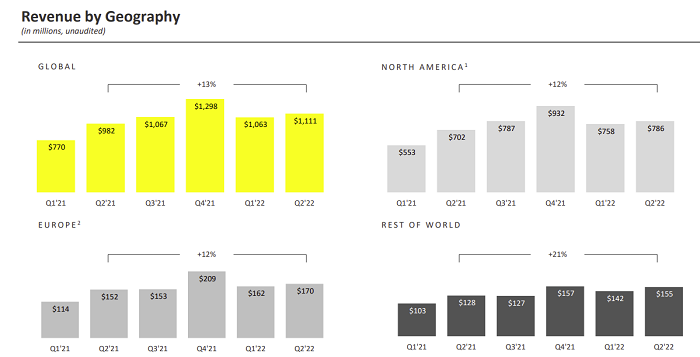 As you can see here, Snap’s revenue did grow, reaching $1.11 billion for the quarter, but the rate of growth is much slower than the company has seen thus far.

“We observed a 25 percentage point deceleration in revenue growth quarter-over-quarter, with revenue decelerating as we moved through the quarter. The deceleration in revenue growth was observed across both our direct-response and brand advertising businesses, even as direct-response advertising grew modestly faster. Additionally, we continued to see demand grow faster for mid and upper-funnel objectives while growing relatively slower for lower-funnel app-based goal-based bidding (GBB) that have been most directly impacted by platform policy changes.”

Snap’s leadership team has also sought to reassure investors that it is looking to address this, despite these evolving impacts.

“The second quarter of 2022 was more challenging than we expected […] While the continued growth of our community increases the long-term opportunity for our business, our financial results for Q2 do not reflect the scale of our ambition. We are not satisfied with the results we are delivering, regardless of the current headwinds.”

In order to address this, Snap says that it will look to maximize its community growth initiatives, while also investing heavily in its direct-response ad offerings, in order to deliver ‘measurable returns on advertising spending’.

Whether any of that will change things is hard to say, but Snap has been proactive in advising the market of its position, and it’s keen to underline the fact that it is working to evolve its systems to maximize its revenue benefit.

Although, if it can’t grow its audience in the key markets, that may not matter, at least for some time.

The longer-term question then is how long will Snapchat be relevant, and how much can Snap invest in new advances, like AR, in order to stay in touch with the next key trends?

Snapchat is currently the leader in the AR space, with its users spending a lot of time using its AR Lenses.

Snapchat is generally the originator of each big AR trend, while the app is also developing its own AR glasses to compete with Apple, Meta and Google in the space.

The question, then, is whether Snap will have the capacity to maintain these developments while also delivering growth. It is still increasing its development costs, but whether that is sustainable is another question.

The bottom line is that Snapchat is seeing positive growth developments, which show much potential for the future – but really, it depends on how far off that future is, and how much Snap can maximize its revenue potential in emerging markets.

Because it’s not seeing big growth in key areas. And at some stage, the downward pressure on revenue will have to meet the upward drive on costs, which could force Snap to make some tough calls on how it builds (or doesn’t) for the next stage.

What is BeReal? Your Guide to the Newest Social Media App