The new Belkin BoostCharge Pro portable fast charger for the Apple Watch is the only standalone charger – other than Apple’s – that supports fast charging on the latest-generation Apple Watch. But he may have promised more than he can fulfill.

When Apple announced the Apple Watch Series 7, it did so with a lot of pomp. One of the new features was the much-needed faster charging. Unfortunately, this change isn’t just done by updating the battery, adjusting the coil, or increasing the power supply. A brand new charging puck was needed, with an almost identical design.

All existing chargers from Apple and a number of third parties, could only charge the Apple Watch Series 7 at the previous lower speed. If you want a fast charge, you need a new fast charger.

As stated at the time of this review, you have limited options for these chargers. There are official packs from Apple, such as the one that comes bundled with every new purchase of an Apple Watch. Or you have the larger Belkin BoostCharge Pro 3-in-1 multiple charger we reviewed earlier. Then there’s this guy.

The Belkin BoostCharge Pro portable fast charger for the Apple Watch is designed to be a charger that works easily at home on your desk, but can be quickly packed and taken with you when you go on a weekend trip.

It comes as a square while in black or white. A small Belkin logo is printed in the front right corner. The body tapers into a ring on the underside giving it the appearance of hovering just above the surface of your table. It is a simple design and looks clean and minimal.

Silicone covers the plastic case which provides a beautiful soft-touch finish, but also ensures it won’t get damaged or damage anything around you when you put it in your bag. 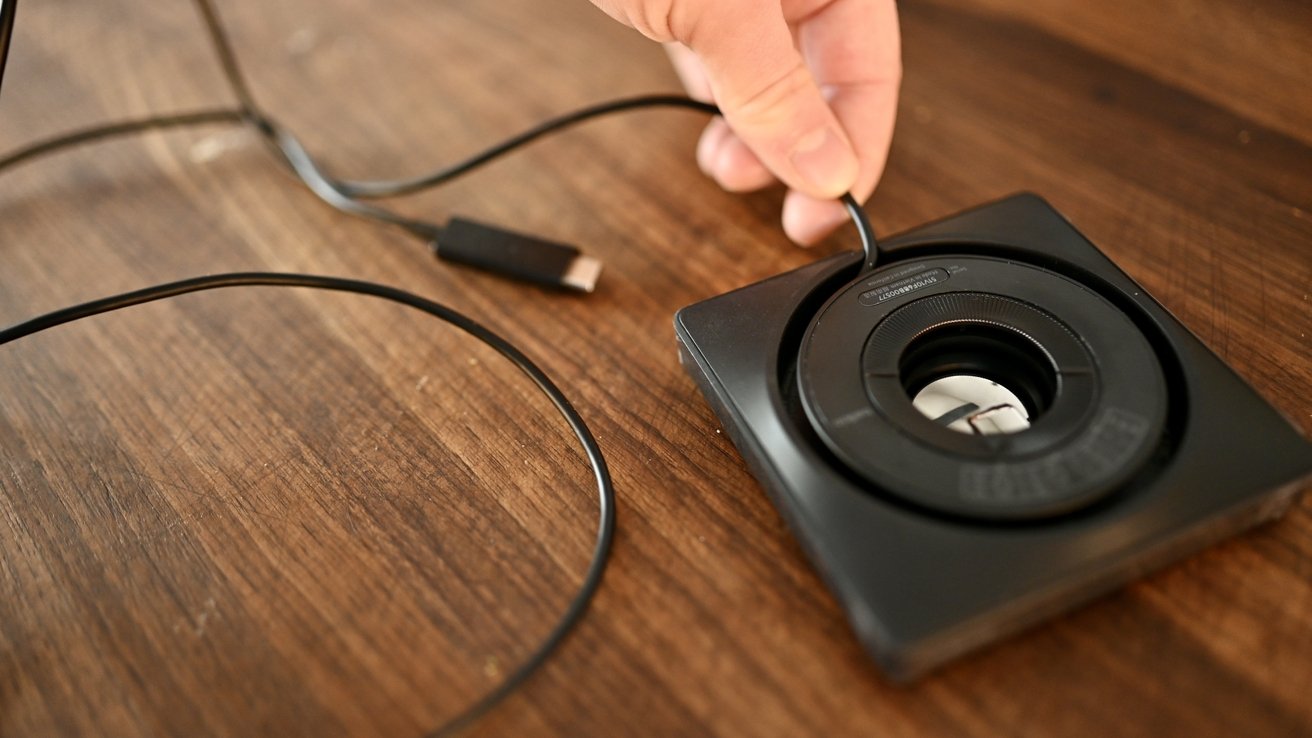 A cable almost four feet long is attached to the dock. It wraps itself neatly around the underside of the dock and unwraps much more than we initially expected. That hides a good amount of cable and more than Apple includes in the box with your Apple Watch. Its 3.9-foot cable can help reach remote outlets that are not always well positioned in hotels.

Docking stations for the Apple Watch can be inconvenient because there are, in general, two models of the Apple Watch. Small and big. When placed horizontally in nightstand mode, they require different charger heights to keep the clock centered on the puck. 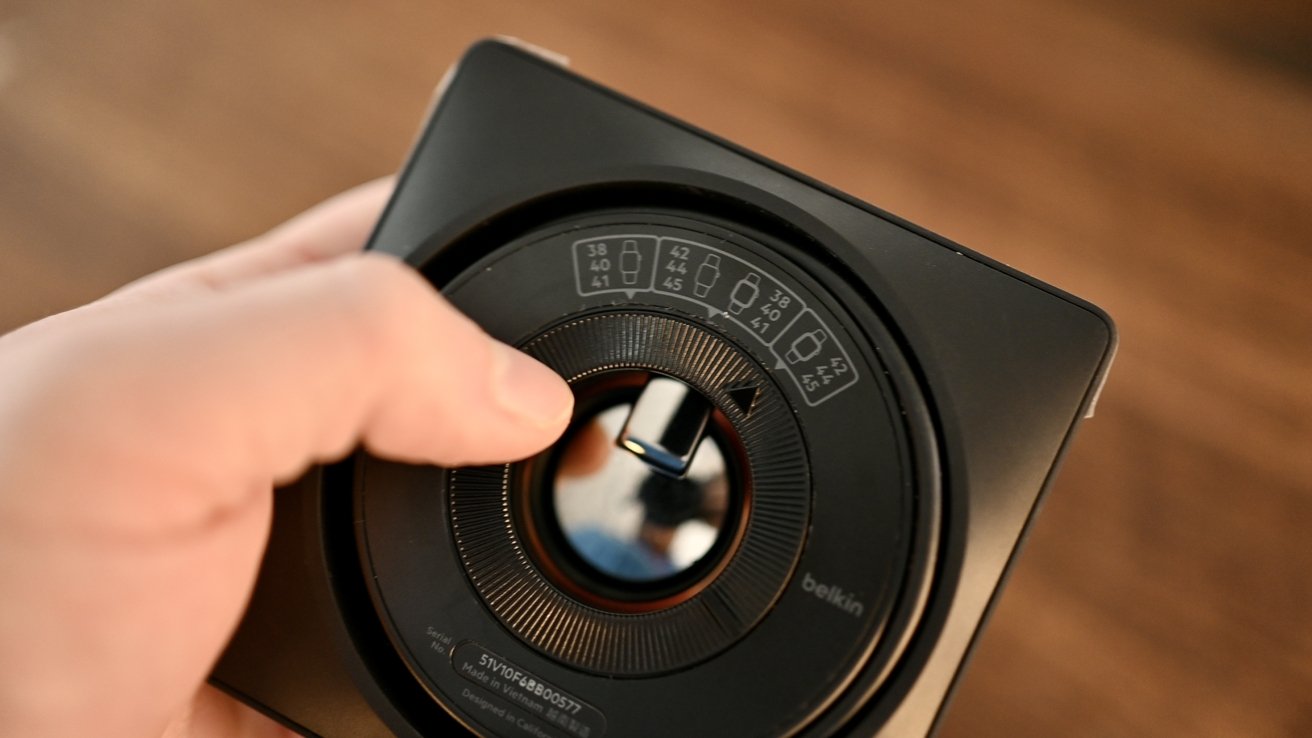 Belkin solves this problem using a precision wheel at the bottom of the docking station. Turn the wheel and the height of the puck is adjusted to one of three heights. At the lowest point, it will fit Apple Watch models of 38/40/41 mm. The highest setting is designed for 42/44/45 mm models while carrying a holster. There is also a central option that can fit either on a small watch with a case or on a larger watch without a case. 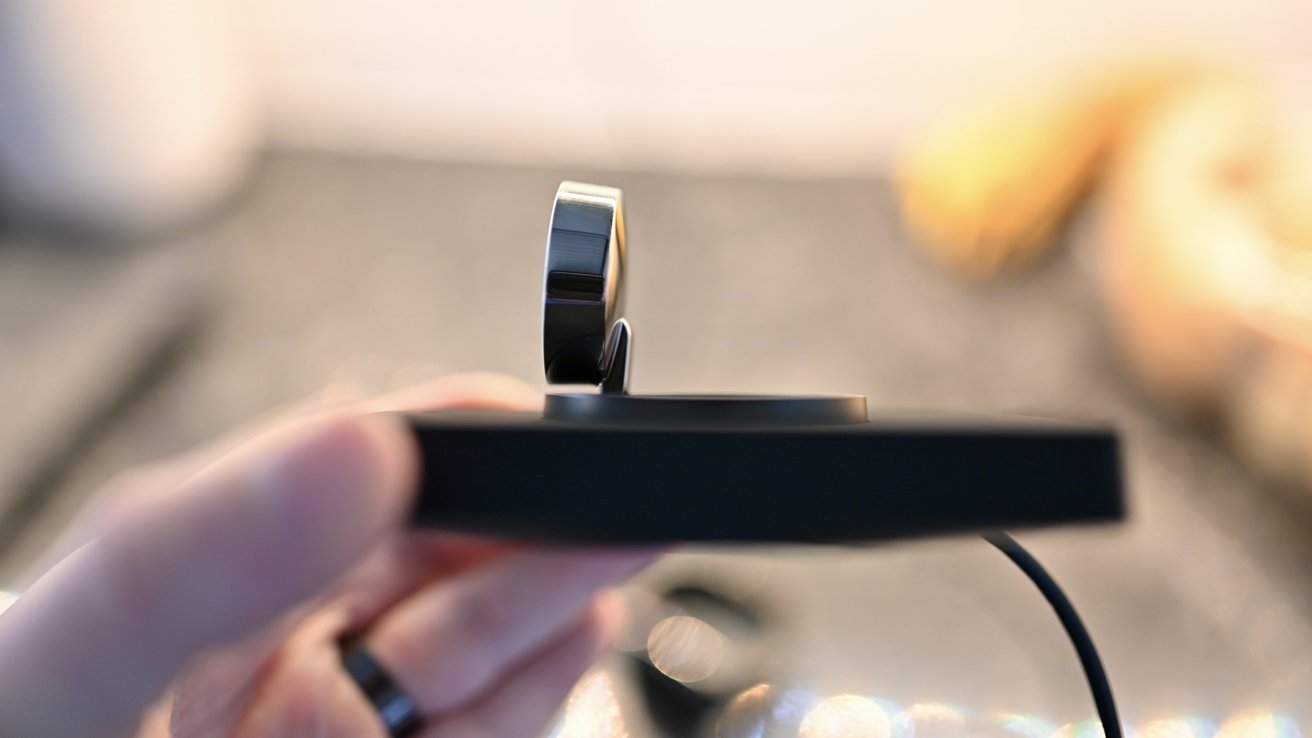 Of course, you don’t have to adjust the puck if you want to place your Apple Watch straight over it. On its own, it can be rotated from a straight angle to a 90-degree angle for viewing next to the nightstand. As you push it up through the bottom, it snaps into place to lock. It only takes a little pressure to return to a flat position for travel.

The fast-compatible pack is coated with polished stainless steel which gives it an extra note of premium product. 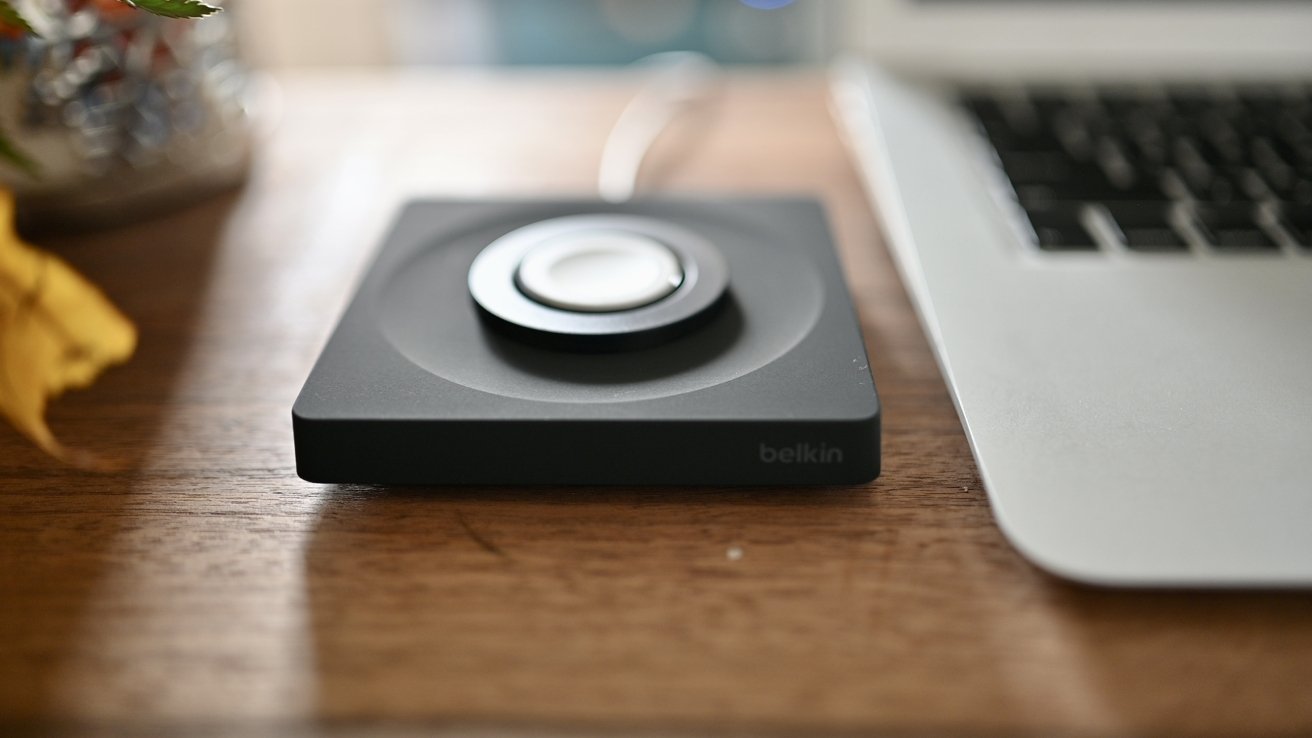 Speaking of fast charging, the newly discovered speed can deliver 80 percent charge in just 45 minutes, a jump of 33 percent over all previous Apple Watch models. If you don’t have enough time for that, an eight-minute charge will support eight hours of sleep monitoring.

If you don’t have an Apple Watch Series 7, this will charge your Apple Watch at a regular rate.

While we generally like this charger, we can’t help but feel that it was a missed opportunity on some level. It’s designed to be a travel charger, but it feels a bit like a big size. If you really go on a trip, it seems that a lone cable would be better.

The cable also cannot be completely hidden. About six inches was left free with the USB-C connector on the end. We’d rather have the whole thing taken off. 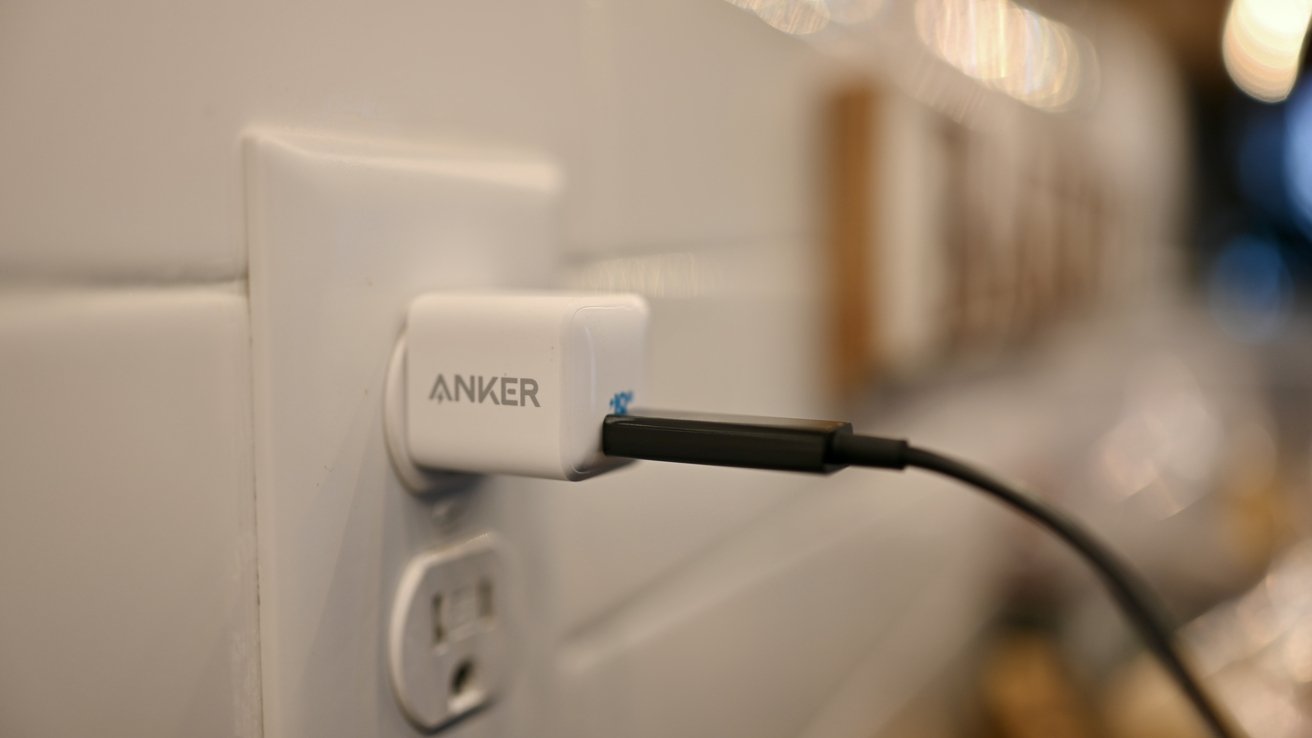 You need to get your own 20W charger

It also doesn’t come with a charger. With its significant price, it would be nice for Belkin to include a compact 20-watt USB-C plug in the box. Maybe even a GaN wall plug with two outlets so we can charge our iPhone and Apple Watch at the same time while we’re away with one plug. Instead, it remains for us to procure and increase the total cost of charging our watch ourselves.

Apple charges $ 29 for a USB-C cable, while Belkin has put a $ 59 price tag on the Belkin BoostCharge Pro portable fast charger for the Apple Watch. For that additional change, you get a larger docking station, integrated cable management, a longer power cord, and an improved charging experience.

These benefits are probably enough to justify the cost to a significant number of users, but for many the price will be too high. Currently, since Belkin is the only option, he can charge that rate. But it may not be long before other third parties join the party. 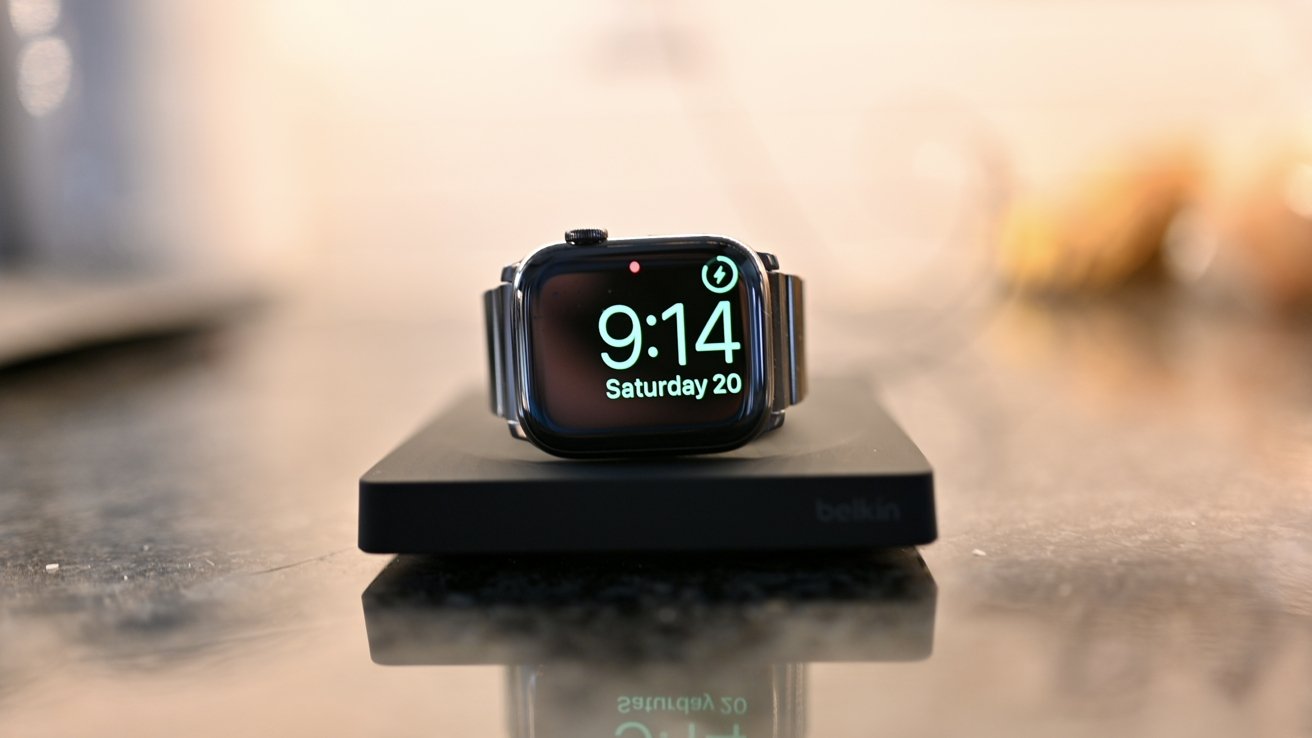 If you have the latest Apple Watch Series 7, you can’t go wrong with the Belkin Travel Charger, you’ll just have to pay for luxury. And your own brick.

Featured Posts
Carrot Weather, Fantasian and many more are winning the App Store 2021 awards
49 mins ago