NYTSTND Quad Tray MagSafe is an expensive four-way charger made of leather and wood of Amish origin that fills your nightstand while remaining fashionable.

NYTSTND offers a variety of chargers made from premium materials. We tested the Quad Tray MagSafe with oak finish, black leather and a USB-C connector for the iPad, but there are other configurations to suit individual needs.

The Quad Tray MagSafe can wirelessly charge two devices on its five-coil wireless charger, the Apple Watch on its original Apple Watch charger and the iPad on its built-in USB-C connector. Its goal is to be a one-stop charging solution for your nightstand.

Many modern charging solutions seek to capture a futuristic finish or mimic Apple’s aluminum and steel design. However, NYTSTND chose leather for the base and wood native to the Amish for the frame.

The design looks more like a piece of furniture than a piece of technology. Five wood finishes and two leather colors make it easy to customize the NYTSTND to suit your bedroom.

The leather is soft to the touch and fits well into the shape of the charger. An extra piece of leather is included to keep the iPad balanced when placed on the charging connector.

One small complaint is the underside of the pedestal. The wood finish is wrapped underneath and is beautiful, but will never be seen during use. There are four small padded feet in the corners so that the stand can be slightly raised from the table itself. However, we would prefer a kind of rubber holder that holds the stand in place, as the padded feet glide easily on a smooth surface.

Depending on your furniture, you may want to use some kind of Command Strip glue or rubber handles under the NYTSTND. Otherwise, the stand slides around with any touch, which is not ideal.

The construction seems to be solid, but in some aspects the handmade nature of the device can be seen. For example, the leather base in the tray in our model was not glued completely, so it could move a little until it shrinks properly. 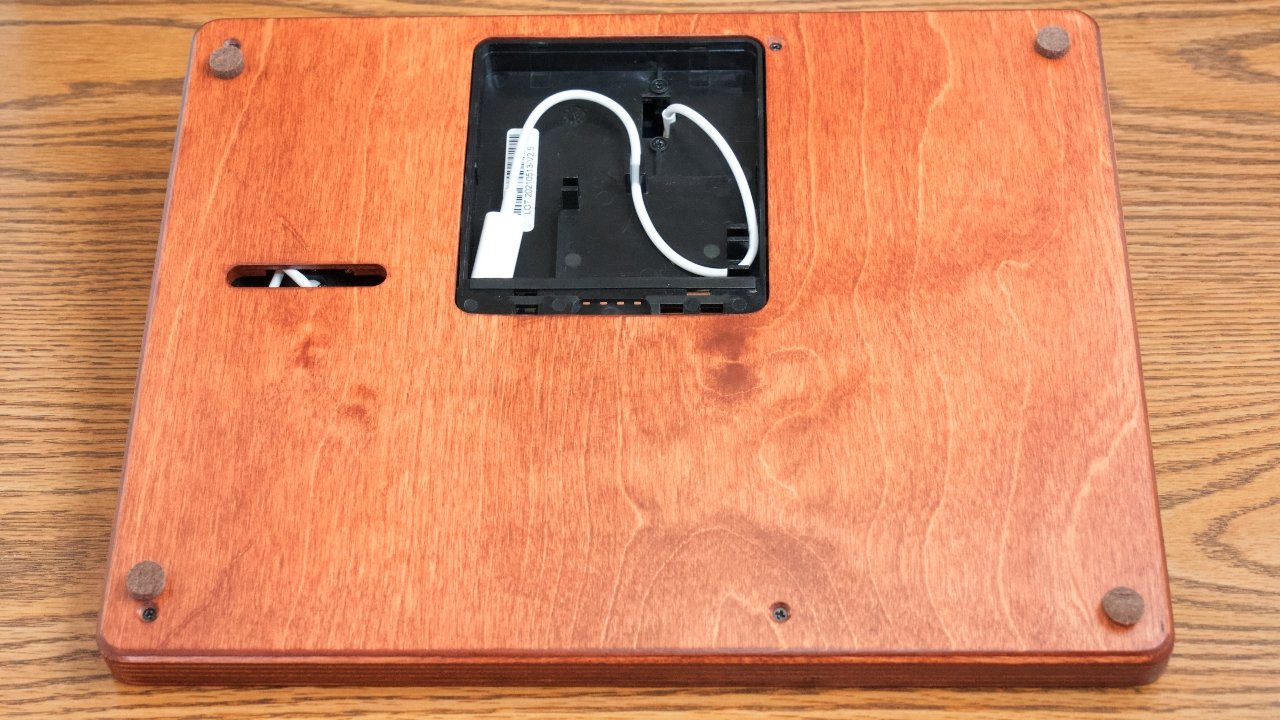 The Apple Watch charger connects via a hidden USB-C port

Further inspection shows that the device consists of standard parts connected by screws and glue. We note this only because it makes it easier to repair or replace certain parts of the charger, as long as NYTSTND can send you replacement parts.

The Apple Watch charger is really Apple’s original charger set in a piece of plastic – the wire connects via USB-C behind the panel on the back. The USB-C plug appears to be connected in a similar way, with a cable leading to the port rather than a hard-line connection.

We had hoped that this would allow us to replace the Apple Watch charger with a new fast charger included in the Apple Watch Series 7, but that was not the case. Removing the charger is easy, but the actual filling puck is glued to the plastic mold, so a new piece would be needed for a complete replacement. Some more adventurous people might make their own mold using a 3D printer because it’s a simple piece.

Leaving the little design pitfalls aside, using NYTSTND is a real pleasure. Thanks to this stand, we were able to greatly simplify the charging situation on our nightstand.

Instead of using four separate cables and adapters to charge your basic Apple products, we were able to charge everything from this stand with a single incoming cable. We used to use Belkin’s 3-in-1 wireless MagSafe charger and USB-C charger to achieve the same result, but in a more awkward way. 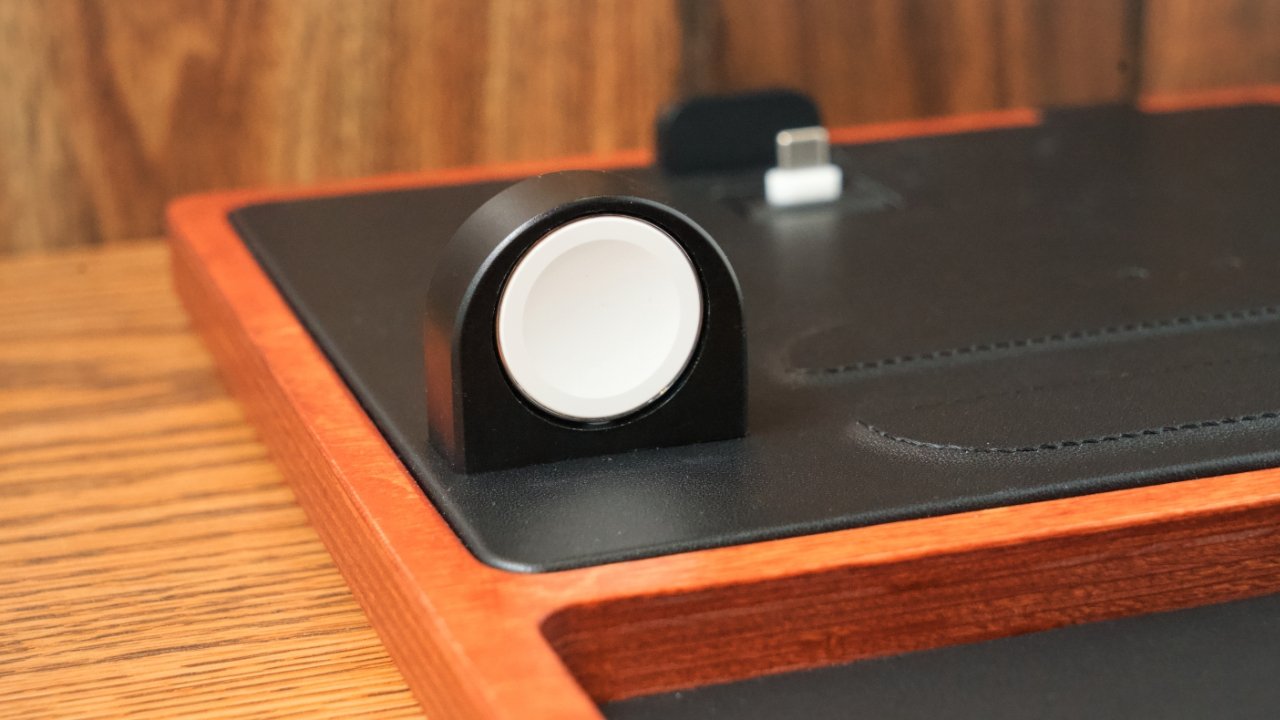 Now, instead, we have one sleek solution that charges everything and also displays nicely. We especially like that the iPad is set up vertically to display notifications or for easy use as a bedside alarm.

Our iPad mini usually takes up a USB-C charger, but even the 12.9-inch iPad Pro could use this charger without a problem. The included leather cover was able to provide sufficient support to prevent the devices from swinging too far back.

However, the USB-C port is a bit awkward to use because you have to tilt the iPad at a right angle to place it in the charger. We would appreciate some kind of recess or groove to help align this, but that’s not a problem. 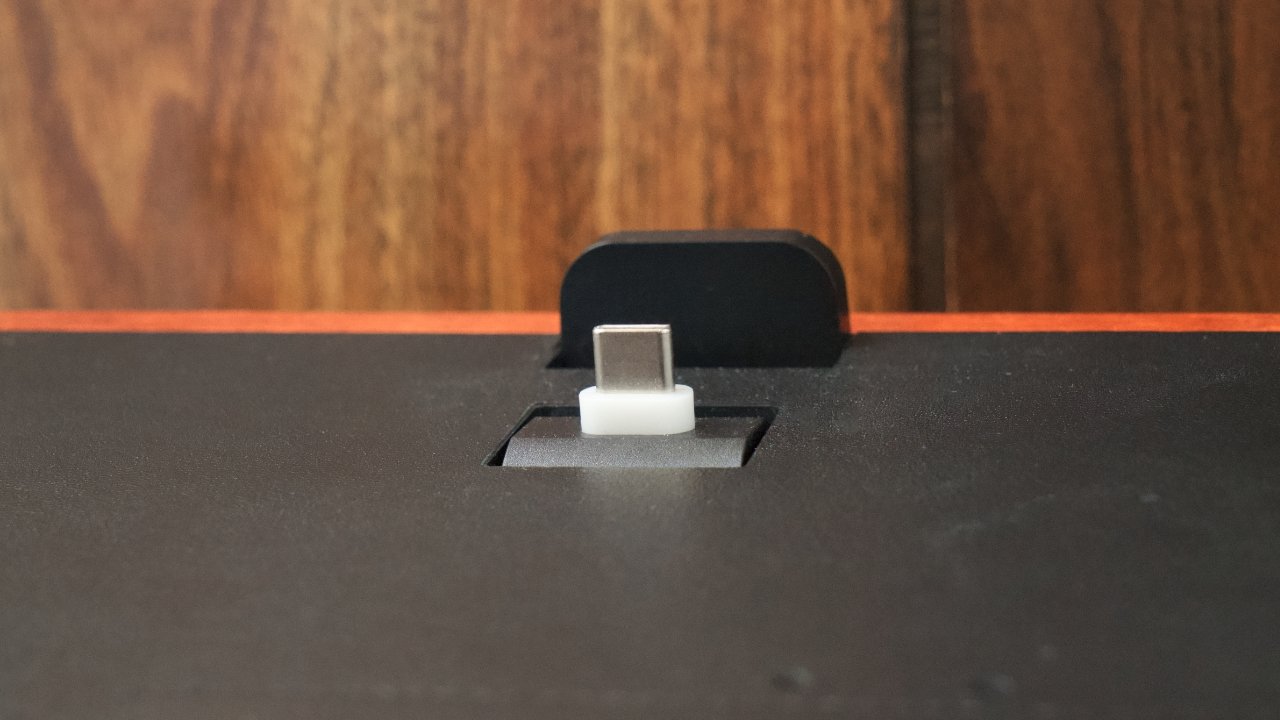 The five-coil charging pad is a wireless charger that can charge the iPhone to 7.5 W. While this is technically not MagSafe, it is magnetic, so the iPhone stays in place and won’t slip after a random notification vibrates the phone.

The pad can charge two devices at once by 5W each, so we were able to charge our iPhone 13 Pro Max and AirPods Pro at the same time. This isn’t the fastest charging, especially since the iPhone can be charged at 15W on a real MagSafe, but it’s enough to charge the battery overnight.

The LEDs light up to indicate that charging has started, so there is no need to guess whether you have aligned the devices correctly. The LEDs also flash if any foreign objects are detected that could be dangerous to the charger.

There is no one appealing marketing name for these bedside chargers. Instead, the name describes the exact configuration. Customers can order Quad, a charger for four devices, Trio, a charger for three devices and Duo, a charger for two devices. There is also the option of adding a drawer to store other little things.

Each of the configurations is made of the same materials and uses main coils for wireless charging for two devices. The trio adds an Apple Watch charger, and the Quad adds a USB-C or Lightning charger for the iPad.

Anyone in the market for a good multi-device charger will not be disappointed with the NYTSTND line. However, the high price can deter many potential buyers.

However, the price pays off if you want a piece of technology that can easily fit into the design of your home. Most other chargers will look like part of the technology and will not always blend well with the aesthetics.

The high price reflects the use of Amish wood, quality leather and handmade. The Quad Tray MagSafe we ​​tested costs $ 234, and prices range up to $ 129 for the Duo MagSafe model.

Where to buy NYTSTND

Here’s a Marvel cartoon that could have been