YouTube has become a significant element within the broader Creator Economy, with the platform generating billions of dollars each year that’s then passed on to creators via its Partner Program and other initiatives.

But just how significant YouTube is in this respect may surprise you, with a new study by Oxford Economics finding that YouTube’s creative ecosystem contributed more than $25 billion to the American economy in 2021, and supported more than 425,000 full-time equivalent jobs.

The study, which has been released today, provides some powerful insights into YouTube’s presence, and how it’s helping to support creators in a range of ways.

The team from Oxford surveyed more than 6,000 YouTube users, creators, and businesses for the report, giving it a huge data pool to work with, with the results, as noted, underlining the significance of YouTube’s platform, via various means. 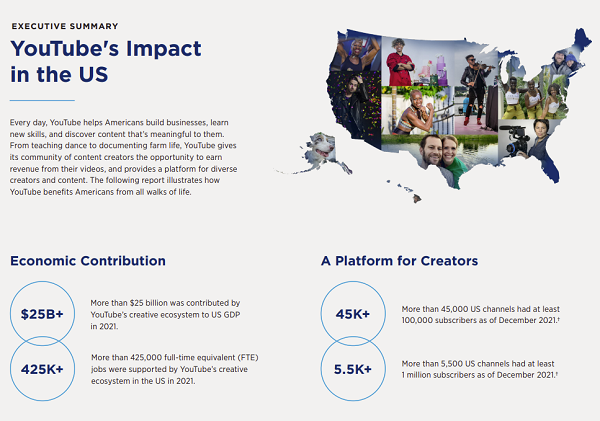 This remains one of YouTube’s greatest competitive advantages – while TikTok is the video platform of the moment, and Meta has had varying success with its video tools, YouTube offers more earnings potential for creators, which is a big part of why it continues to win out , and get more top creators to align themselves to its app.

That’s why YouTube Shorts is such a significant threat to TikTok – not because Shorts is as good, nor that it can serve as a standalone competitor to TikTok, as such. But because it’s a complementary channel to a creators’ main YouTube feed, and if you can build your channel audience, you have greater potential to monetize your work – something that TikTok creators continue to be frustrated by.

Eventually, that could become a bigger concern, and could see more of TikTok’s top stars migrating to YouTube instead.

The report also looks at how businesses are making use of YouTube, with specific insights into how SMBs have derived benefit from establishing a YouTube presence.

It’s an interesting overview of YouTube’s presence and its role in digital interaction – and how it’s fueling the Creator Economy, and providing a pathway for more people to monetize their passions.

Which, again, could end up being a major element in the online video wars, especially as TikTok creators reach a level of notoriety where turning their content into a career becomes a viable consideration.

At some stage, YouTube likely looks more appealing in this context, and if enough creators switch across, that could become an existential threat for TikTok in the future.

LinkedIn Announces a New Expansion of its Creator Accelerator Program