As it continues to lean into the short-form video trend, Meta is adding new ways for users to remix content into Reels on Instagramwhile it’s also added the capacity to create Reels from your existing videos within Creator Studio.

First off, on IG – as shown in this example, posted by Lindsey Gamblesome Instagram users are now being notified of a new ‘Remix for photos’ option when posting static images in the app.

As Instagram explains, Remix for Photos enables users to create Reels based on your feed post content, which they can then download themselves, within their own clips. Which means that people can re-use your content however they like – but you can switch off the option in your settings if you’d prefer that doesn’t happen.

Here’s how it looks in practice: 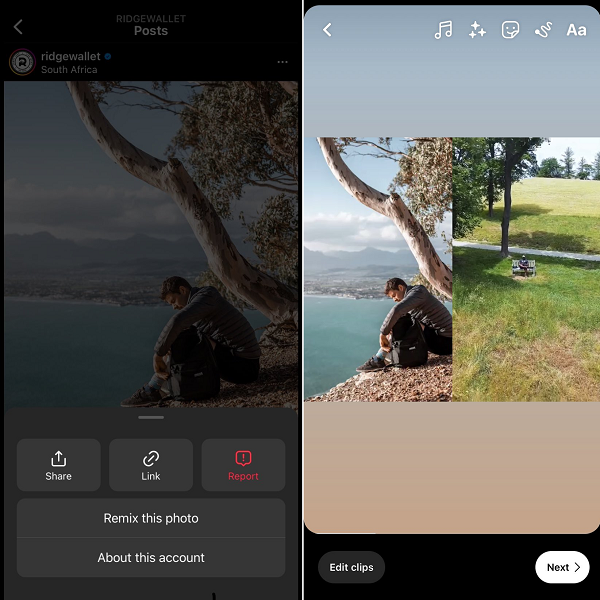 It’s another way to react to content in the app, which has become a popular use case on TikTok, with the participatory nature of the platform essentially building on meme trends by enabling users to provide their own takes, as opposed to just consuming the latest content .

Instagram now also enables users to remix any video they see in the app, providing more inspiration for Reels content – and with Reels now contributing 20% ​​of all time spent in the app, it makes sense for Instagram to lean into the trend where it can , and add more options for Reels engagement.

In terms of brand use, this could be particularly handy for inviting takes on new products or brand announcements, with users able to share a quick response via Reels clips. That could also lead to some lambasting of brand announcements via the same process, but getting your audience to interact with your posts could be a good way to boost reach and engagement.

On another front, Meta has also added the capacity to create Reels in Creator Studioby remixing your existing videos into shorter clips. 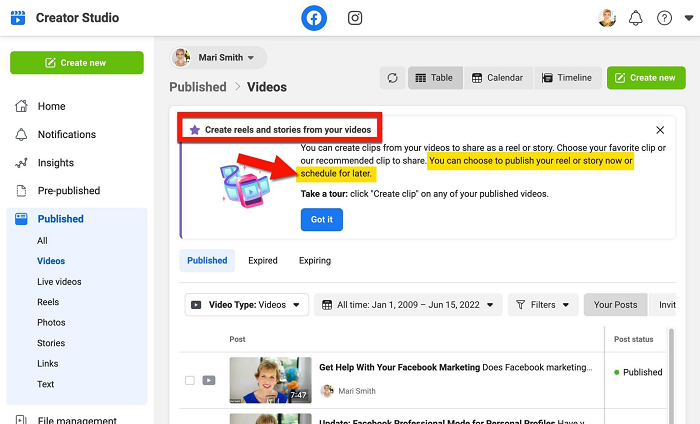 As you can see in this example, posted by Facebook marketing expert Marie Smith (and shared by Matt Navarra), Meta is notifying Creator Studio users of its new process to trim your existing videos into Reels clips.

The process guides you through the editing process to create Reels and Stories clips, by using the best parts of your existing video uploads. 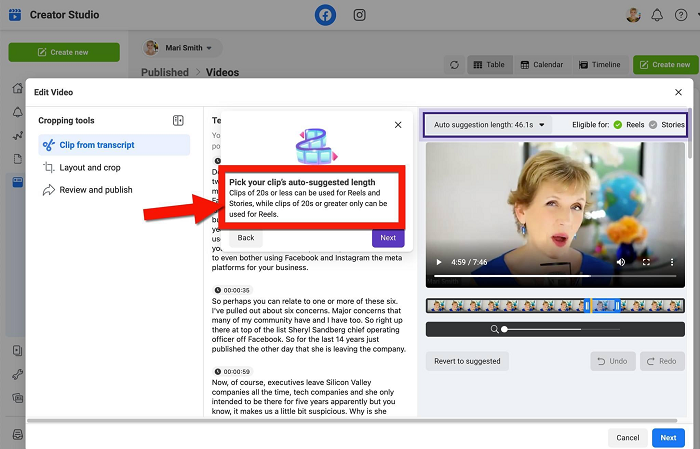 It’s another way for Meta to help brands and creators merge into Reels content – which aligns with broader usage trends, while also giving Meta even more Reels content to show to people, as it continues to seek out new ways to double down on short-form video trend.

Indeed, a new strategic overview from Meta has outlined how it plans to make Reels even more of a priority on Facebook, because of the way that short form video has become such a transformative trend in the social media space.

“Today’s genre of public short-form video opens up new ways for people to create and discover content. While Facebook’s discovery engine is designed to support many different formats (text, photos, video, and eventually Metaverse experiences), our biggest gap today is around short-form video, and we’re focused on integrating Reels in Home, Watch, In Feed Recommendations, and Groups. ”

So more Reels, in more places – because Facebook, essentially, is scared that if it doesn’t move into line with evolving consumer trends, that it will quickly lose relevance, and user engagement as a result.

Which is already happening. Various reports have suggested that people are now spending more time on TikTok than in the Facebook app, while the very nature of TikTok’s short-form, rapid scroll clips is actually altering user attention spans, and changing how people consume content.

In this sense, Facebook actually feels quite dated already, which is why it’s now working to catch up to TikTok once again, by displaying more Reels, more often, in more places within the app.

These new updates align with that broader trend, and will help to guide users towards the same.

Of course, there is also a chance that Meta will change tack at some stage and stop prioritizing Reels, as it’s done in the past with other video content. But again, the habitual nature of short-form video feels more permanent, in many ways, in changing how users interact.

It’s definitely worth more brands looking to experiment with Reels, at least, and these updates provide more capacity on this front.

How to Use Social Media for Career Growth