Although the first leak of the Mac Studio came only a few days ago, it’s already been followed by an unconfirmed report that the mid-range desktop will debut at the March 8 Apple event.

Renders showing the Mac from several angles have also leaked. And details of a new Apple external display, too.

The latest leak comes from Luke Miani, who says, “The Mac Studio is Apple’s first-ever entry into the mid-range desktop market. “

Miani worked with concept-artist Ian Zelbo to create renders of the upcoming device. 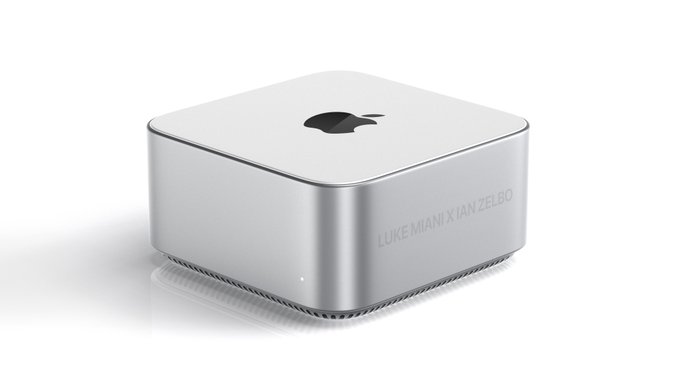 The upcoming computer will allegedly have almost exactly the same footprint as the Mac mini, but be 4 inches tall. The smaller computer is just 1.4 inches tall.

Unfortunately, Miani was not able to give any specifics on the processor, RAM or storage capacity of the next Mac. “I think it’s safe to say that it’s going to ber higher end than an M1 Mac mini but we don’t really know where that could go,” said the tipster. He threw out some processor possibilities, like an Apple M1 Pro or M1 Max. Or dual M1 chips. Or it could even be the first with the Apple M2 processor.

The previous leak on the device said it will fit between the Mac Pro and the Mac mini. That source said there are two versions in development: “One features the M1 Max chip (the same as the 2021 MacBook Pro) and the other a variant of the Apple Silicon chip that is even more powerful than the current M1 Max.”

As for timing, Miani predicts “unequivocally” that the Mac Studio will be unveiled at Apple’s March 8 product-release event. In addition, he says the Apple spring event won’t include any MacBooks. But the iPhone 13 will come in a new green option, plus he says the much-anticipated iPad Air 4 will be announced, too… in purple.

And a new Apple 27-inch display

Miani also went out on a limb Monday by saying that the March event will bring a new Apple external monitor, which might be called the Studio Display.

He doesn’t have an exact price, but he did say it will be “a much more affordable display” than Apple’s $ 5,000 Pro Display XDR.

Luke Miani has not yet built up a reputation for Apple prognostication. The Apple Studio could be a make-or-break prediction for him. Watch his full video for more details on the Mac Studio desktop and the upcoming display: