LinkedIn’s looking to provide more engagement options, in order to build on its record levels of user activity, with new comment and comment reply options on Event pagesand a new ‘Repost’ optionproviding another way to amplify LinkedIn updates.

As you can see in this example, now, within the Comments tab of a LinkedIn event, you can engage with attendees before, during and after the session, while you can also reply to specific comments in-stream.

As explained by LinkedIn:

“You can comment or react directly on the Event post on the feed or on the Event page in the Comments tab. Comment will not generate notifications to the Event attendees. To invite people to the conversation, you can mention them in your comment. ”

The option is designed to capitalize on LinkedIn Events engagement, with more than 24,000 events now being created in the app every week. LinkedIn also recently expanded its streamlined ‘Boost’ ad option to incorporate LinkedIn Events, providing users with another way to amplify their LinkedIn event listings.

It could be a good way to both encourage topical discussion, while also promoting your event.

The option is in the process of being rolled out, with some users now seeing the advanced Comments options in-stream. 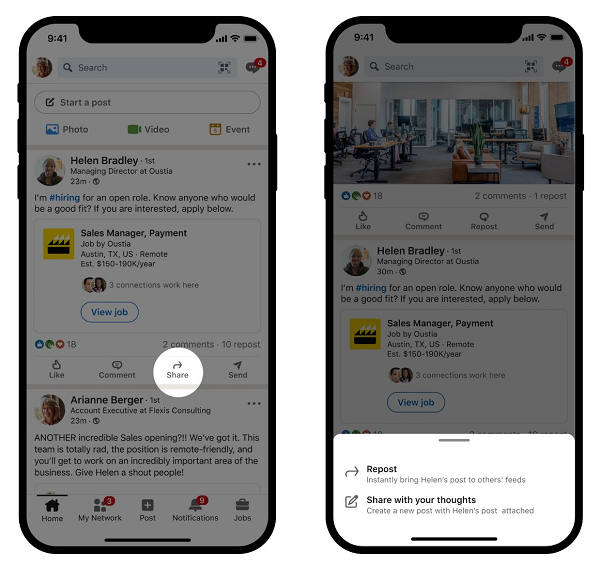 As you can see in this example, shared by social media expert Matt Navarrasoon, you’ll see a new ‘Repost’ option when you tap on the ‘Share’ prompt, which will allow you to share without adding a comment (currently your only option).

That’ll make it easier to amplify job opportunities, as per the example here, while it will also help to streamline app engagement, by reducing the onus on users to add their own commentary to every re-share.

Though that could also be problematic.

Back in 2019, the man who invented the ‘retweet’ option on Twitter, Chris Wetherell, said that he regretted the feature in retrospect, after seeing how it could be used to amplify criticism and negative opinions.

Speaking about his realization of this during the ‘Gamergate’ incident of 2014, Weatherell noted that:

“It was very easy for [people] to brigade reputational harm on someone they didn’t like. Ask any of the people who were targets at that time, retweeting helped them get a false picture of a person out there faster than they could respond. We didn’t build a defense for that. We only built an offensive conduit. ”

That mechanic could end up being similar on LinkedIn, where a negative post could harm someone’s professional reputation through reposts, and be amplified more widely than if users were required to add their own opinions.

LinkedIn isn’t used in the same way as Twitter in this respect, but it still seems like a risk, despite the obvious advantages of reposting job opportunities and similar in the app.

Either way, it’ll be another tool to consider, while metrics for reposts are also being built into your LinkedIn updates,