First announced as part of NVIDIA’s CES 2022 presentation, the company’s new GeForce RTX 3050 desktop video card is finally rolling out to retailers this month. The low-end video card is being positioned to round out the bottom of NVIDIA’s product stack, offering a modern, Ampere-based video card for a more entry-level market. All of this comes as PC video card market still in chaos due to a combination of the chip crunch and crypto miner demand, so any additional cards are most welcome – and likely to be sucked up rather quickly, even at an MSRP of $ 249 (and higher).

The GeForce RTX 3050 comes as both NVIDIA and AMD are finally addressing the lowest segments of their market stack. AMD launched their Navi 24-based Radeon RX 6500 XT just last week, and now NVIDIA is taking their turn to follow with the RTX 3050. A traditionally lower-margin segment of the video card industry, the low-end desktop cards are typically the last to launch, and that has been particularly the case this generation, as the required production resources have been tied up making higher-end video cards.

This is the most evident in NVIDIA’s choice of GPU for the desktop RTX 3050. Even though the company launched the laptop versions of the RTX 3050 series almost 8 months ago, and based it on a purpose-built low-end GPU (GA107), NVIDIA isn’t using GA107 for the desktop RTX 3050. Instead, they’re using salvaged GA106 GPUs that didn’t make the cut for use in the RTX 3060, which are then being cut down to a configuration matching the GA107-based laptop parts . Put simply, this means that NVIDIA isn’t allocating any GPU production capacity specifically to the RTX 3050, at least not right now. Instead, the company is relying on their stockpile of salvaged GA106 GPUs, which NVIDIA has been amassing ever since the RTX 3060 launched almost a year ago.

But either way you get there, the net result is an RTX 3050. Like it’s existing laptop counterpart, this SKU is aimed at more modest 1080p gaming. I hesitate to call the “entry-level” card (despite being at the bottom of the stack) due in part to the overall performance profile and the relatively high TDP of 130W, but if the RTX 3060 is for uncompromised 1080p gaming, then the The RTX 3050 is certainly a step down in both performance and in its intended market segment.

As previously mentioned, the RTX 3050 is using a salvaged GA106 die that’s roughly cut down to GA107 specifications. This means we’re looking at 2560 CUDA cores spread out over two or three GPCs within the GA106 die. Relative to the RTX 3060, NVIDIA isn’t touching the clockspeed ranges here, so the card gets the same 1.78GHz boost clock rating as its bigger sibling. Though I wouldn’t be surprised to see the RTX 3050 maintain slightly higher clockspeeds in practice, especially on cards that are reusing designs for the more power-hungry RTX 3060.

In terms of performance expectations and on-paper throughput, the RTX 3050 is basically two-thirds of an RTX 3060. This means it can offer 66% of the pixel throughput on the ROPs, while shading / compute / texturing performance is a bit higher at around 71% of the RTX 3060’s performance. Though in either case it should be leaps and bounds ahead of the RTX 3050’s predecessor, the GTX 1650.

Meanwhile TDPs have also been scaled down accordingly with the weaker hardware. Whereas RTX 3060 was a 170W TDP card, RTX 3050 is a 130W card. On a historical basis this is quite high for an NVIDIA 50-series card – you can forget about any configurations that don’t rely on an external PCIe power plug – but that comes with the territory of using a relatively beefy GPU like GA106. The RTX 3050 is functionally more of a second-tier RTX 3060, and it shows with things like the TDP.

More unexpectedly, the PCIe bus width has also been scaled down for this part. While the GA106 supports a PCIe 4.0 x16 bus, NVIDIA is only offering a x8 link here. It should not make much (if any) of a performance difference, but it underscores the fact that the RTX 3050 was meant to be a GA107-based card. Consequently, by reducing every spec to something GA107 can do, NVIDIA is keeping the door open to swapping in GA107 at a later date, should market conditions make producing more GA107 dies more favorable.

Finally, like the rest of NVIDIA’s current-generation RTX 30 series cards, the RTX 3050 implements the company’s Ethereum hash rate limiter (LHR), which is designed to artificially cap the mining performance of the card. Coming up on a year since LHR was first introduced, it was a modest victory for NVIDIA (driver snafus excluded), however miners have been able to chip away at its effects. As it stands the RTX 3050 has a decent amount of memory bandwidth and enough VRAM (8GB) to handle Ethereum mining, so unlike last week’s Radeon RX 6500 XT, I’m not writing it off for mining duties.

As with the RTX 3060, NVIDIA is not producing a reference (Founder’s Edition) RTX 3050 this time around. So this week’s launch is a pure virtual launch, as NVIDIA likes to call it, with their add-in board partners hitting the ground running with their own designs.

Given the reuse of GA106, expect to see most (if not all) of the AIBs also reuse their RTX 3060 board designs. As is typical for these varieties of second-tier cards, there’s little need to put together new board designs, and reusing existing boards is a big part of what allows AIB to get cards out in volume early in a virtual launch. Consequently, expect to see the usual mix of dual and triple fan cooled cards, with a heavy emphasis on factory overclocked cards. 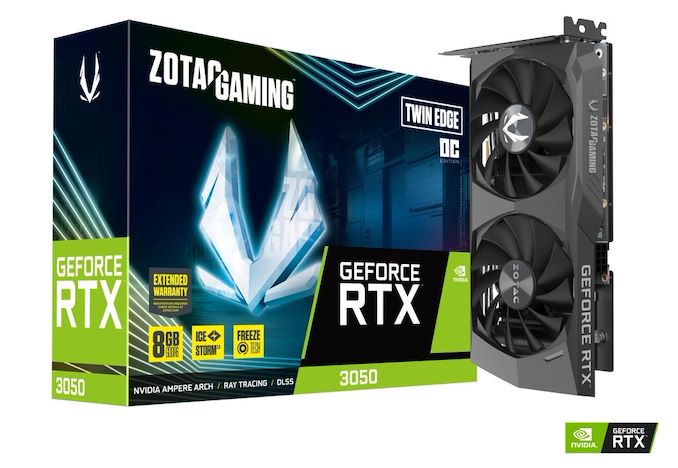 And since NVIDIA doesn’t have a reference card of their own, it’s been NVIDIA’s AIBs that have been sampling cards directly to the press. Our sample, Zotac’s GAMING GeForce RTX 3050 Twin Edge OC, is a very typical example of these cards. Zotac is offering versions of the card with and without factory overclocks, with the factory overclocked version set to come at a pricing premium. As we’ve seen with the RTX 3060 before it, don’t be too surprised to see AIBs focus more on factory overclocked cards for that reason.

Meanwhile in terms of product positioning, the launch of the RTX 3050 rounds out the bottom of NVIDIA’s product stack. The company rarely announces when cards are discontinued, so it’s not clear if NVIDIA has ramped down production of low-end GTX 16 series cards. The RTX 3050 is significantly more powerful than any of the GTX 1650 series cards – and even edges out some of the 1660 cards – so even if the GTX 16 series production continues, those cards are definitely getting knocked down a peg this week. And for NVIDIA’s product marketing efforts, the company can now focus on a completely holistic RTX 30 series product stack.

As for competitive positioning, the RTX 3050 occupies a bit of an odd space in no-man’s land relative to AMD’s offerings. The card is well ahead of the RX 6500 XT, but also well behind the RX 6600 (often splitting the difference), so the RTX 3050 isn’t an especially direct competitor to either card. And if we were in a world where MSRPs meant something, that would be reflected by NVIDIA pricing the card $ 50 (25%) above the RX 6500 XT. Among current generation cards, at least, the RTX 3050 seems to occupy a niche of its own with regards to performance.

This also makes it very hard to predict street pricing, however. The bulk of pricing in the current video card market is being driven by Ethereum mining performance / profitability, and as a mining-capable card, the RTX 3050 is unlikely to be any different. So like the rest of NVIDIA’s RTX 30 series product stack, I don’t expect street prices for the RTX 3050 to stabilize anywhere close to the MSRP. RTX 3060 cards are going for north of $ 600, so two-thirds of an RTX 3060 could easily end up being a $ 400 card – if not more due to competing demand from actual consumers.

The upshot is that the additional card volume from the launch of the RTX 3050 means that NVIDIA and its AIBs are putting that many more cards on the market, where every last bit helps to satiate demand that much more. So like the launch of the RX 6500 XT last week, even the launch of a low-end video card can be a big help in getting video cards into the hands of hungry PC users. In that respect, it’s a given that the RTX 3050 will sell out; the only real question is at what price.

Retail sales for the GeForce RTX 3050 will start tomorrow, January 27th. And like the other video card launches in the past year, we expect to see them sell out quickly. So good hunting.

Safeguard your precious email data with this backup solution 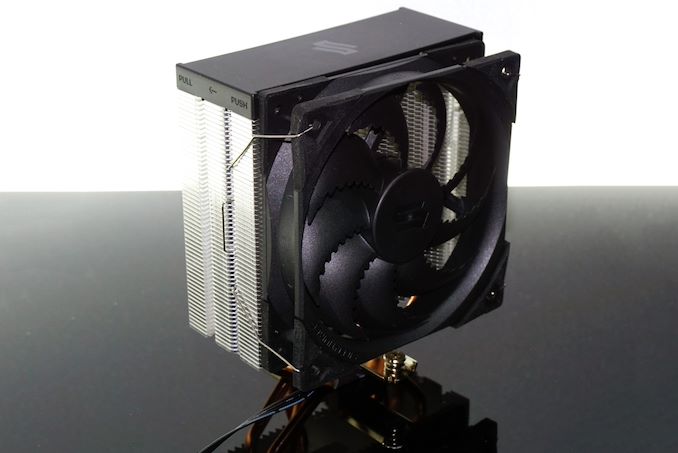