Despite the two families of processors being very closely-related, Intel’s extant 13th-Gen desktop processors (codenamed Raptor Lake) are a very solid upgrade over the previous-generation of Intel Alder Lake desktop CPUs. However, these currently released Raptor Lake processors are fairly high-end, powerful chips that are also targeted at desktop-class power envelopes. This obviously left many wondering what the Raptor Lake mobile family would look like. And today we can show you what Intel’s 13th Gen Core Mobile processors are all about.

As before, Intel’s new mobile processor family comes in four forms: HX, H, P, and U, ordered from highest to lowest in terms of power and performance targets, although that will vary based on implementation, of course. The new Intel Core Mobile series runs the gamut, all the way from thin & light laptops to big, beefy desktop-replacement gaming notebooks. 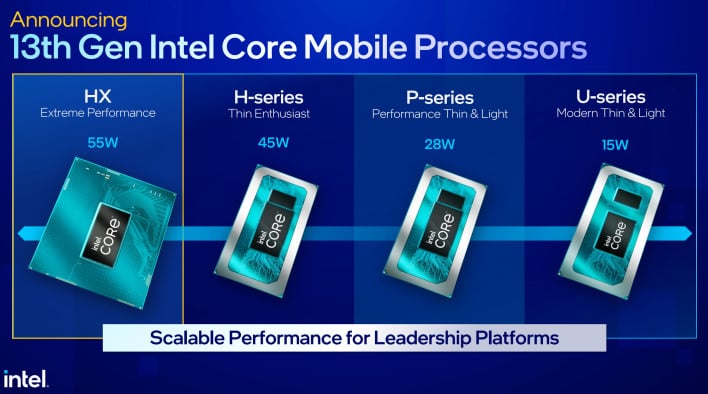 First, let’s take a look at the processors themselves. The big news here is of course the new HX series processors. Intel says its 13th-Gen Core HX platform is “built for enthusiasts and professionals”, and we can certainly see why. The company did not explicitly confirm this, but just like the 12th-Gen Core HX processors, the top-end Raptor Lake CPUs are clearly built upon fundamentally the same silicon as the faster desktop 13th-Gen processors. 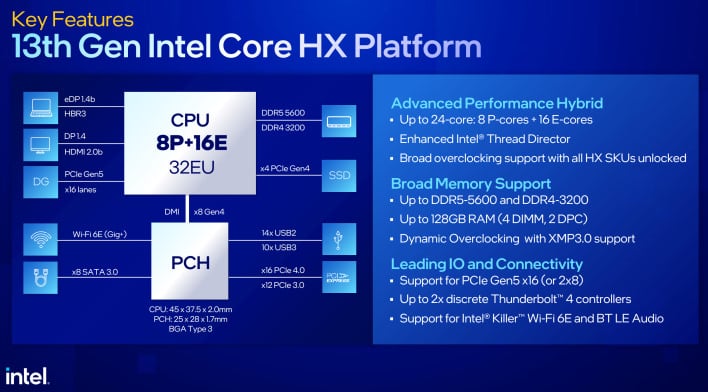 That means that, on the absolute top-end, you get eight Raptor Cove performance cores, sixteen Gracemont efficiency cores, and clock rates as high as 5.6 GHz on the flagship Core i9-13980HX. Just as with the desktop chips, these processors require an off-package PCH (or “chipset”), and because they’re targeted to be paired with discrete GPUs, they come with relatively modest 32-EU integrated graphics. 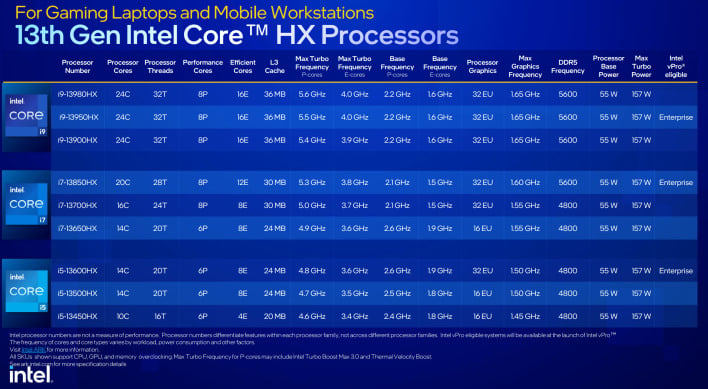 Interestingly, base clocks are actually down slightly on some models in the new generation, likely to stay within the same 55W power budget as the previous generation despite the presence of additional CPU cores. The boost clocks are up by as much as 600 MHz, though, and memory clocks are up too, with the top-end SKUs supporting fast DDR5-5600 RAM. Also, every model is totally unlocked for overclocking—another change from Intel’s last-generation, where vPro-enabled chips locked down core clocks. 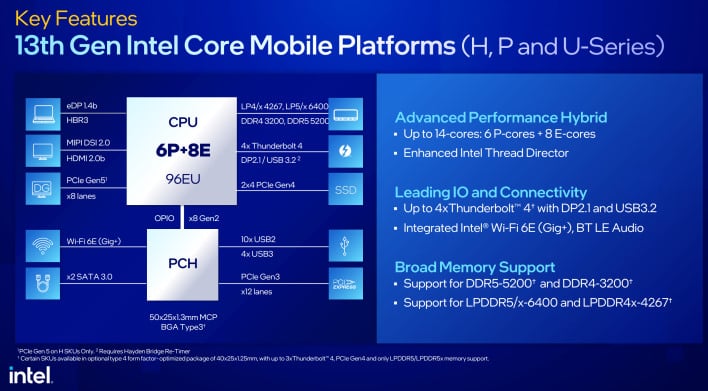 Meanwhile, Intel 13th Gen Core Mobile U, P, and H processors make use of two different dice: one with six Golden Cove P-cores and eight Gracemont E-cores, and then another with just two of the same P-cores and the same eight E-cores. If those configurations sound familiar, that’s because these are essentially (but not literally) refreshed Alder Lake mobile processors. We say “essentially” because they’re not just reheated leftovers; Intel’s done some work to freshen up the recipe. 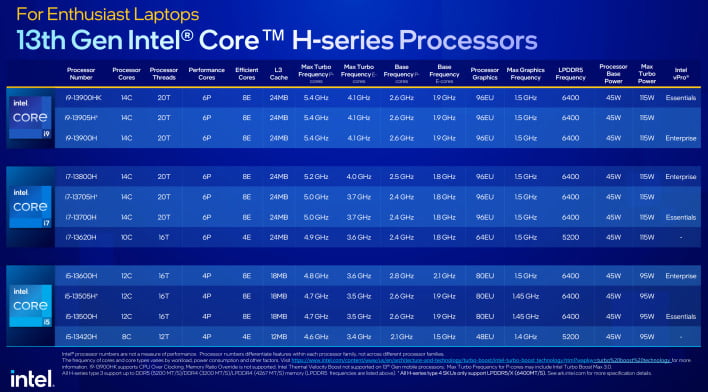 The most notable changes in the H-series processors are an overall upward shift in clock rates, generally to the tune of around 300 to 400 MHz on the CPU cores, and 50-100 MHz on the GPU. As before, these processors have much more potent integrated graphics than the HX series processors, as they’re less likely to be paired with discrete GPUs; the 96-EU Iris Xe you’ll find on most of the models has a bit more horsepower.

Assisting with graphics performance on the 13th-Gen CPUs is another frequency bump, this time to the memory clock. Using BGA LPDDR5 memory, most of the 13th-Gen Core H-series processors can run their RAM up to 6400 MT/s. That’ll give a final memory bandwidth of over 102 GB/sec, faster than some surprisingly-recent discrete GPUs. While Intel isn’t using Arc branding for these integrated GPUs, they will apparently use the Arc Control software. 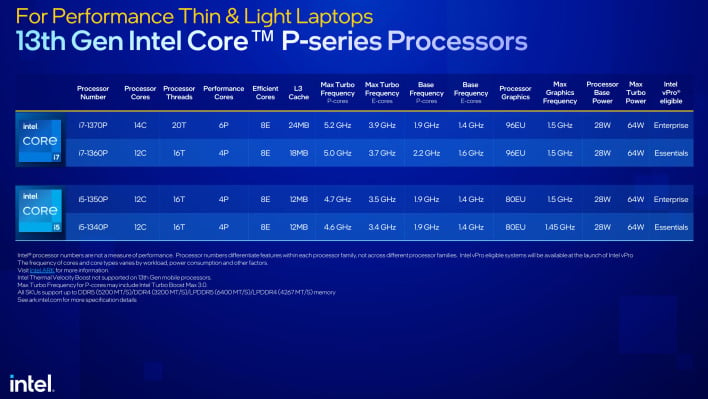 Stepping down the stack in terms of power limits, we have the Core P-series. The concept for this family—which focuses on offering a mid-power option between the 15W ULV processors and the 45W or 55W high-end processors—isn’t exactly new, but it was formalized into its own product family in the previous generation. The latest iteration of the Core P-series sees updates much like those for the H-series above.

That means fundamentally the same CPUs with a bit of spit and polish to keep them shiny. The last-Generation Core i7-1280P has been moved down a spot to the Core i7-1370P despite the fact that it has gained 300-400 MHz of turbo frequency and 100 MHz on its base frequencies and graphics frequency. The previous 1270P got bumped out of place to become the Core i7-1360P, and it gets the same upgrades. Meanwhile, the Core i5-P models are virtually unchanged besides the extra clock rate, and the Core i3-1220P is gone entirely. 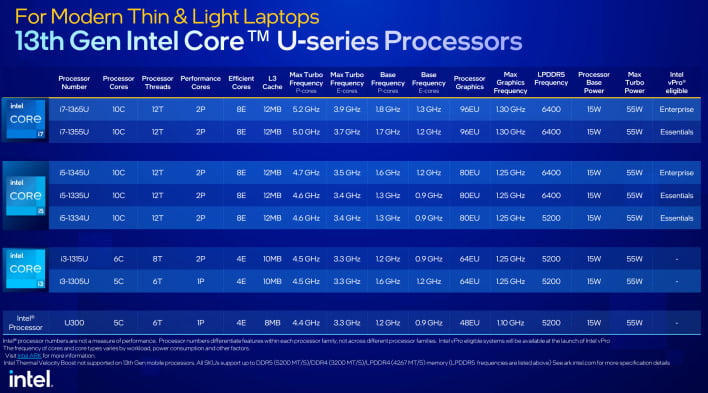 For the littlest 13th-Gen CPUs, we’re looking at nine processors, only eight of which wear “Core” branding. Two Core i7s, three Core i5s, and two Core i3s, all based on the little 2P+8e die. All of the Core i7s and all of the Core i5s keep all ten cores, while the Core i3-1315U drops half of its E-cores and then the Core i3-1305U additionally loses one of its P-cores. The Core i3 SKUs also miss more of their graphics, dropping them to 64 EUs.

As expected, probably thanks to process refinements, all of these chips are clocked higher than their last-generation counterparts—even if only by 100 MHz in the case of the Core i3s. The Core i5s pick up 200 or 300 MHz, and the top-end model grabs a whopping 400 MHz of max turbo frequency, putting its peak at 5.2 GHz. Pretty unlikely that processor will persist at that frequency for long with that 55W max turbo power, though.

Since the release of the last-generation Core mobile chips, Intel has retired its Pentium and Celeron brands, so the most cut-down form of Raptor Lake mobile is known as the “Intel Processor U300”. It’s very closely related to the Pentium 8505 from last year, with the same parts in the same configurations right down to clock rates. Thankfully, Intel isn’t launching a CPU without Turbo Boost this time around. 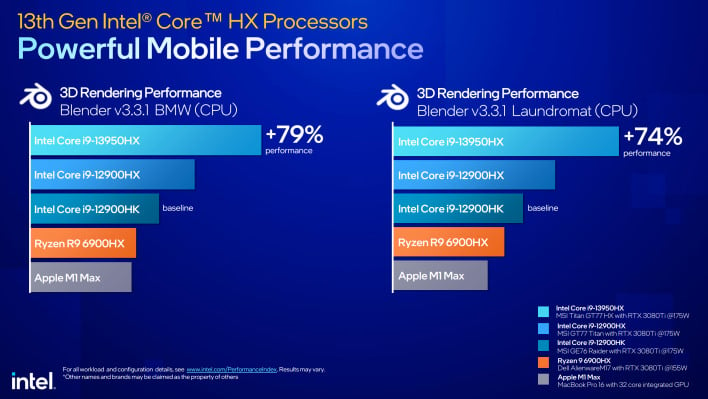 Naturally, Intel has some slides promising potent performance improvements, mostly in productivity applications. In the case of the Raptor Lake HX processors, it’s largely down to the eight extra E-cores giving a solid bump to multi-core grunt, like in these Blender benchmarks where the Core i9-13950HX gains nearly 80% over its last-Gen equivalent. 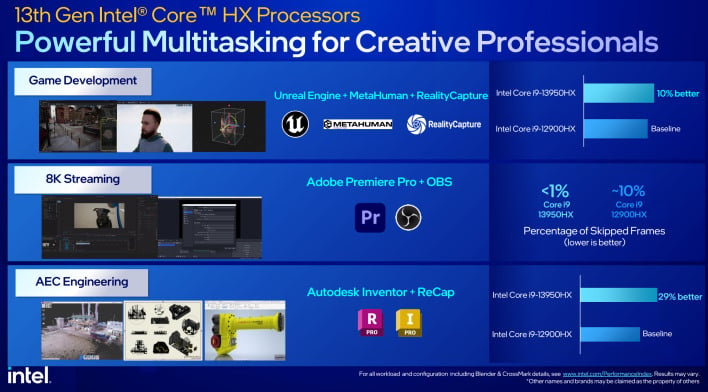 Gains in Autodesk and the Adobe suite are more modest, but still nothing to sniff at for sure. These are the kinds of tasks that we’d usually recommend users do on a desktop machine, but then, this is essentially a desktop processor, so if your laptop is cooled properly (and plugged-in), the Core i9-13950HX crushes these tasks. 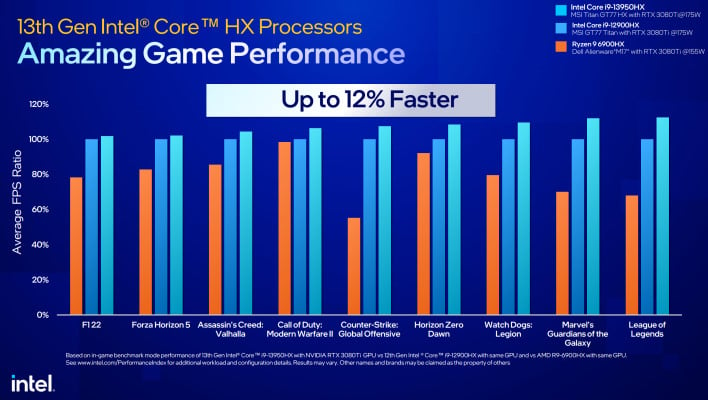 The extra L2 cache and bump to turbo clocks benefit the systems’ gaming performance, as well. The gains aren’t as great as desktop Raptor Lake’s, but these chips can’t use unlimited power to clock to the ceiling, either. 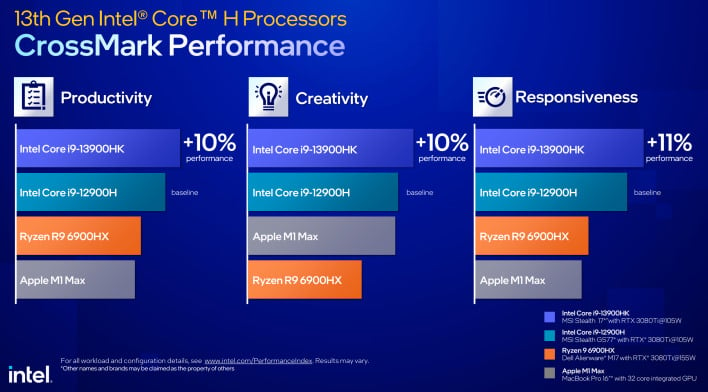 Intel touts some performance gains for the 12th-Gen Core “H” series processors too, although it’s really just the one benchmark. This page compares the Core i9-13900HK against the Core i9-12900H as well as two competitors from rival companies, and it comes away with a 10-11% gain against its own last-generation part in BAPCo CrossMark’s three categories. 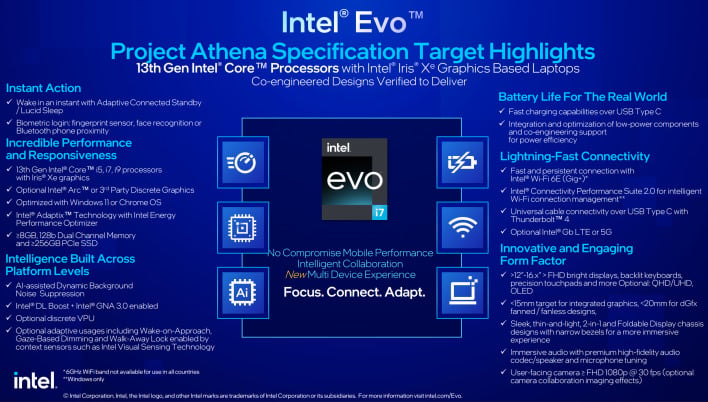 Finally, Intel’s Project Athena has blossomed into what the company calls “Evo”. This is essentially a platform-marketing program not unlike the company’s “Ultrabook” or “Centrino” initiatives of years past. Intel Evo laptops integrate a great many specific features and functions, with the intention that Evo laptops offer a baseline set of capabilities, performance and user experience. The image above outlines exactly what those capabilities are as of today, and Intel says it has over 100 Evo designs on the way from “>15 OEMs.”

Besides the Evo platform systems, Intel also says it has “60+” designs on the way based on the desktop-class Core HX processors, as well as “over 250” designs sporting the 13th-Gen H-, P-, and U -series CPUs. Look for laptop designs based on the new 13th-Gen Core CPUs to be available soon this quarter.