Intel’s Tiger Lake-based NUCs have been shipping for well over a year now. Four product lines were initially planned – Panther Canyon for the mainstream market, Tiger Canyon for the professional / business market, Phantom Canyon for gaming enthusiasts, and the Elk Bay Compute Element for embedded applications. Supply chain challenges have been impacting the availability of different models in different regions, but that has not prevented Intel’s partners from delivering complementary products.

Akasa is a well-known manufacturer of thermal solutions for computing systems targeting industrial applications as well as home consumers. They have been maintaining a lineup of passively-cooled cases for Intel’s NUCs since 2013. We had reviewed their Turing case for the Bean Canyon NUC a couple of years back, and came away pleasantly surprised. Not often do we see a fanless case managing to keep the processor cooler than an actively-cooled solution for the same workload, but that is exactly what the Akasa Turing achieved. For Intel’s Tiger Canyon NUCs, Akasa carries three main products – Newton TN, Plato TN, and Turing TN. The company sampled us the Newton TN for review with Intel’s sample of the NUC11TNKi5.

On the Tiger Lake UCFF front, we had reviewed only a couple of systems – the ASRock Industrial NUC BOX-1165G7 last year, and more recently, the Supermicro SYS-E100-12T-H. We took the Akasa Newton TN review opportunity to also perform a detailed evaluation of Intel’s own offering – the NUC11TNKi5 Tiger Canyon NUC. The review below introduces the Tiger Canyon NUC hardware and details the build process for its fanless version using the Akasa Newton TN before going into the usual platform analysis. Following this, the benchmark numbers for the passively cooled configuration are compared against the original NUC11TNKi5 (along with a host of other systems). Finally, results from the thermal evaluation of the fanless system are presented. Together, these provide an idea of ​​what Tiger Lake can deliver in a reasonably compact fanless system and also whether the Newton TN manages to replicate the success of the Turing.

Intel’s Tiger Lake processors brought the Willow Cove microarchitecture fabricated in a reasonably mature 10nm process to the market last year. The focus was mainly on the mobile market, but the company launched a suite of mini-PCs based on them last year. The company segments the Tiger Lake-based mini-PCs into different categories – Performance, Pro, Enthusiast, and Extreme. The NUC11 Pro Kit NUC11TNKi5 (Tiger Canyon) we are looking at today is a UCFF solution that places a 100mm x 100mm motherboard inside a 117mm x 112mm x 37mm chassis. The board comes with a soldered processor – the Core i5-1135G7. Belonging to the Tiger Lake-U family, it can operate over a range of configurable TDPs – from 12W to 28W. The NUC’s default BIOS settings set the PL1 (sustained) and PL2 (burst mode) levels to 28W and 64W respectively, with the PL1 Time Window set to 28 seconds.

End-users have the flexibility to choose their own storage device and RAM. For best performance, a PCIe 4.0 x4 NVMe SSD can be used, and DDR4-3200 SODIMMs are supported. Our NUC11TNKi5 sample came with the following components pre-installed:

The system is actively cooled, with a blower fan on the underside, away from the side of the motherboard with the SODIMM and M.2 slots.

The specifications of our Intel NUC11TNKi5 review configuration are summarized in the table below.

The NUC package includes the usual VESA mount and screws along with an integration guide. A region-specific power cord accompanies the 120W (19V @ 6.32A) adapter. 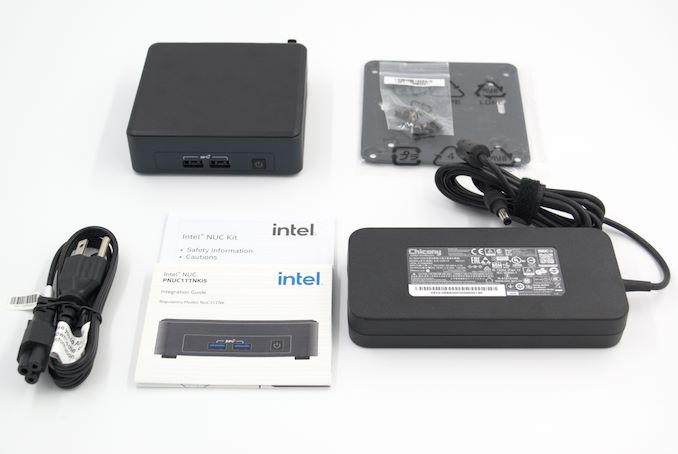 The gallery below provides an overview of the kit’s chassis and the I/O distribution. The key differences when compared to the Performance line of Tiger Lake NUCs (Panther Canyon) are the absence of a SDXC card reader, an HDMI 2.0b port instead of a mini-DP port, an extra USB 3.2 Gen 2 Type-A port in the front panel, and the restriction of Thunderbolt Type-C ports only to the rear panel.

The standard NUC11TNKi5 kit above can be used in most scenarios, but there may be use-cases that require the complete absence of any moving parts. In industrial deployments, the reason may be the need to avoid performance loss due to cooling efficiency degradation resulting from dust build-up. For professional creators, it may be due to the need to avoid extraneous noise affecting the work output. The average home consumer may also prefer a silent system to better focus on the work at hand. For HTPCs, multimedia content can be enjoyed without distractions – an aspect that may be of paramount importance to audiophiles.

Traditionally, passively cooled computing systems have either been woefully underpowered for general purpose use, or carried a significant premium in terms of both cost and physical footprint. However, advances in compute performance per watt and novel passive cooling chassis designs (that do not cost an arm and a leg to mass-produce) have combined to give consumers the ability to create powerful, yet affordable, fanless systems. This is where vendors like Akasa come in. For the NUC11TNBi5 (the board inside the NUC11TNKi5 kit), Akasa has three different cases, with dimensions that can satisfy virtually any deployment scenario:

We put the standard kit through our benchmarking process first. Following that, we disassembled the unit, and transferred the board to the Akasa Newton TN. The same benchmarks were processed again on the Newton build. 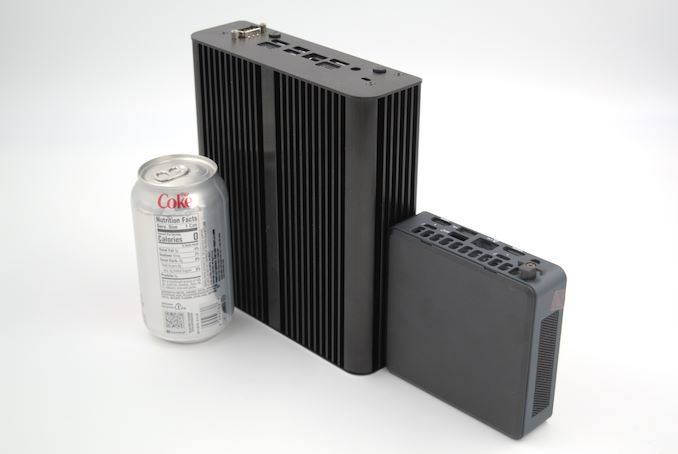 Prior to analyzing the NUC11 platform and looking at the comparative specifications of the considered systems, we take a deep dive into the build process using the Akasa Newton TN.

US antitrust laws should be put to a vote in the next few weeks, say Democrats