This could help – over the last week, Instagram has been giving more users access to its Reels ‘Templates’ option, which enables you to create Reels based on popular content formats in the app.

As you can see in this exampleshared by user Ahmed Ghanemsome people are now seeing the new ‘Templates’ option within the Reels camera, which enables you to select a format for your Reel based on popular trends.

Instagram initially launched its Templates option back in April, which takes users through a frame-by-frame process to create a similar-looking Reels clip.

So if you lack creativity, now Instagram will do the creative framing for you, which could be handy, as a means to create more engaging clips.

But it could also make a lot more of your Reels feed look familiar, due to replication of the same types of clips over and over again, while it also leans on the talents of trendsetters within the app. Which TikTok has come under scrutiny for in the past, and it’ll be interesting to see whether creators start to question the re-use of their formats in this way.

But if you do need help, maybe it’ll come in handy – and that’s not the only way that IG is looking to lend a guiding hand in the Reels creation process.

According to that another discovery by GhanemInstagram will also now recommend songs for your content, based on your upload. 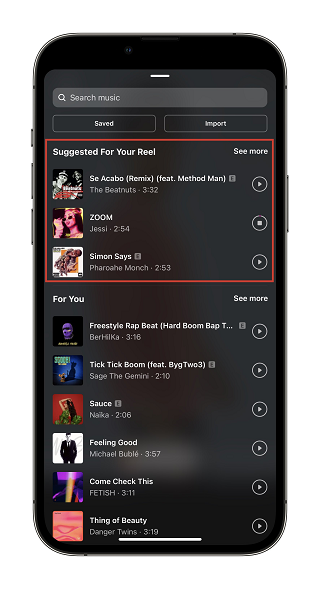 How, exactly, Instagram recommends different songs for different clips is not clear, but based on these tools, you could essentially extricate yourself from almost all your creative content decisions – you just come up with what you want to film and Instagram’s recommendation tools and templates will do the rest.

Which seems to run counter to the whole ethos of the short-form video trend, which enables users to contribute to the latest trends and memes with their own, simple, creative takes. Indeed, what people like most about short-form content is that it provides more avenues for creativity, which makes these new features feel less genuine, and less interesting, even if they do help you get a few more Likes as a result.

Which they probably will, and for brands that are short on time, and are unable to keep up with the latest formats and tracks, they could be a big help (note: business accounts are limited in terms of what songs they can use in their clips).

But I don’t know. It feels a bit artificial, doesn’t it? Like, Meta is so keen to get as many people as possible posting short-form clips that it’s taking all of your own input and personality out of the process.

Maybe I’m over-thinking it – and really, what I am thinking is that someone should create an account that only posts videos using templates and song recommendations to see what sort of engagement it gets.

It could be massive – but it also feels like another step towards killing off the short-form video trend entirely by doing it to death.

Much like Stories before it – and, ultimately, that could be another way for Meta to negate the competition.

TikTok Scales Back Live-Stream Commerce Ambitions, Which Could Be a Big Blow for the App