Have you ever been in a video call and thought “I wish I could take a photo on Mac and share it”? Working from home has us all looking at ourselves more than we normally do, so it’s natural you would want to take a pic from your Mac!

It might not seem like a no-brainer because we are so used to using mobile devices to take pictures these days, but you can take a photo with a Mac using the included webcam. A webcam photo may not be ideal, but there are ways to improve the image after you take it.

We’ll also show you a few apps for snapping great pics when you use a webcam to take a quick photo, and how to use your iPhone as a webcam to take the best selfie on Mac – yes, that’s possible!

How to take a photo on Mac with webcam

Plenty of apps on the Mac App Store offer to let you take pics and most have some sort of unique angle. Some let you clap to snap a pic, others just replace the Mac’s screen grab feature without added features. Some have filters. By and large, there are not many interesting apps to find on the Mac App Store for taking or saving pics.

Your Mac has a built-in app called Photo Booth that saves you the trouble of downloading any of the apps you’ll find on the Mac App Store for taking pics. Photo Booth can snap pics, record video, and has 27 filters that morph your head or overlay fun graphics into the shot.

Just like most apps for taking pictures on Mac, Photo Booth uses your Mac’s webcam, so the quality of those pictures won’t be great. But it might work for you sometimes.

Take a picture with Photo Booth

The screen flashes white as the image capture happens, and that’s all it takes! It’s a simple and great app for snapping the quick pic from your desktop. Especially if you just want to have some fun, and don’t really care about the quality of those pictures.

Saving and sharing selfies taken on the Mac

Your Photo Booth app will save photo from webcam shots locally, right in the Photo Booth app. All your pics will appear at the bottom of the app window. You can also move those pictures to the Photos app if you like. 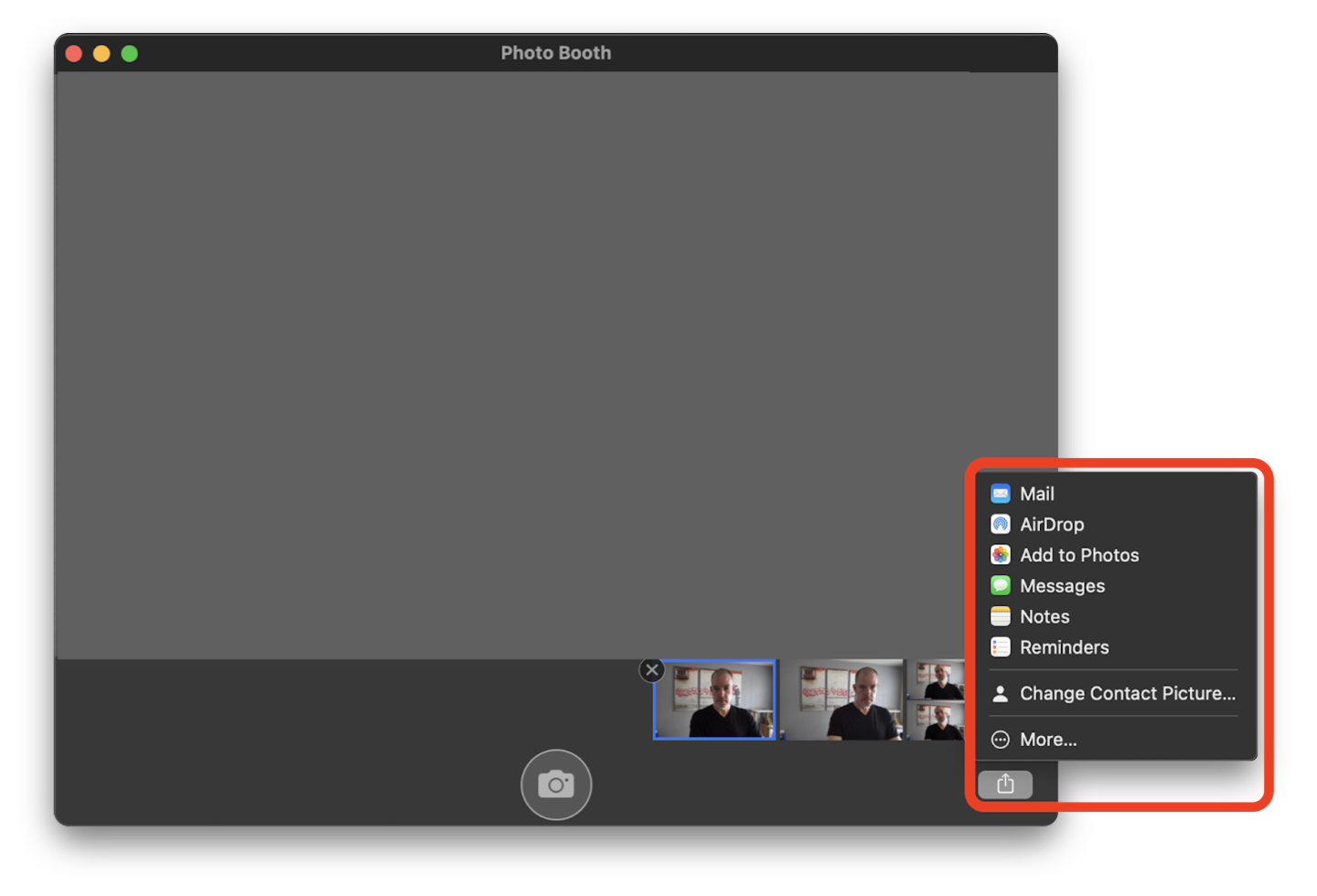 How to take a photo on Mac by screenshotting

Screenshotting gives you the flexibility of taking pictures of your screen in any size. So if you want to take a picture during a video conference, for example, it’s better to take a screenshot. The quality of screenshots won’t differ from the quality of pictures you take with Photo Booth anyway.

CleanShot X is the most robust screen capture tool that lets you edit your screenshots – even before you save them. When you capture your screen, CleanShot X surfaces a handy menu at the bottom left of your Mac’s screen with options to keep your shot pinned, mark the screenshot up, share it, delete it, copy the shot, or save it. CleanShot X’s impressive markup tools allow you to add images or shapes, and remove any personally identifying features. 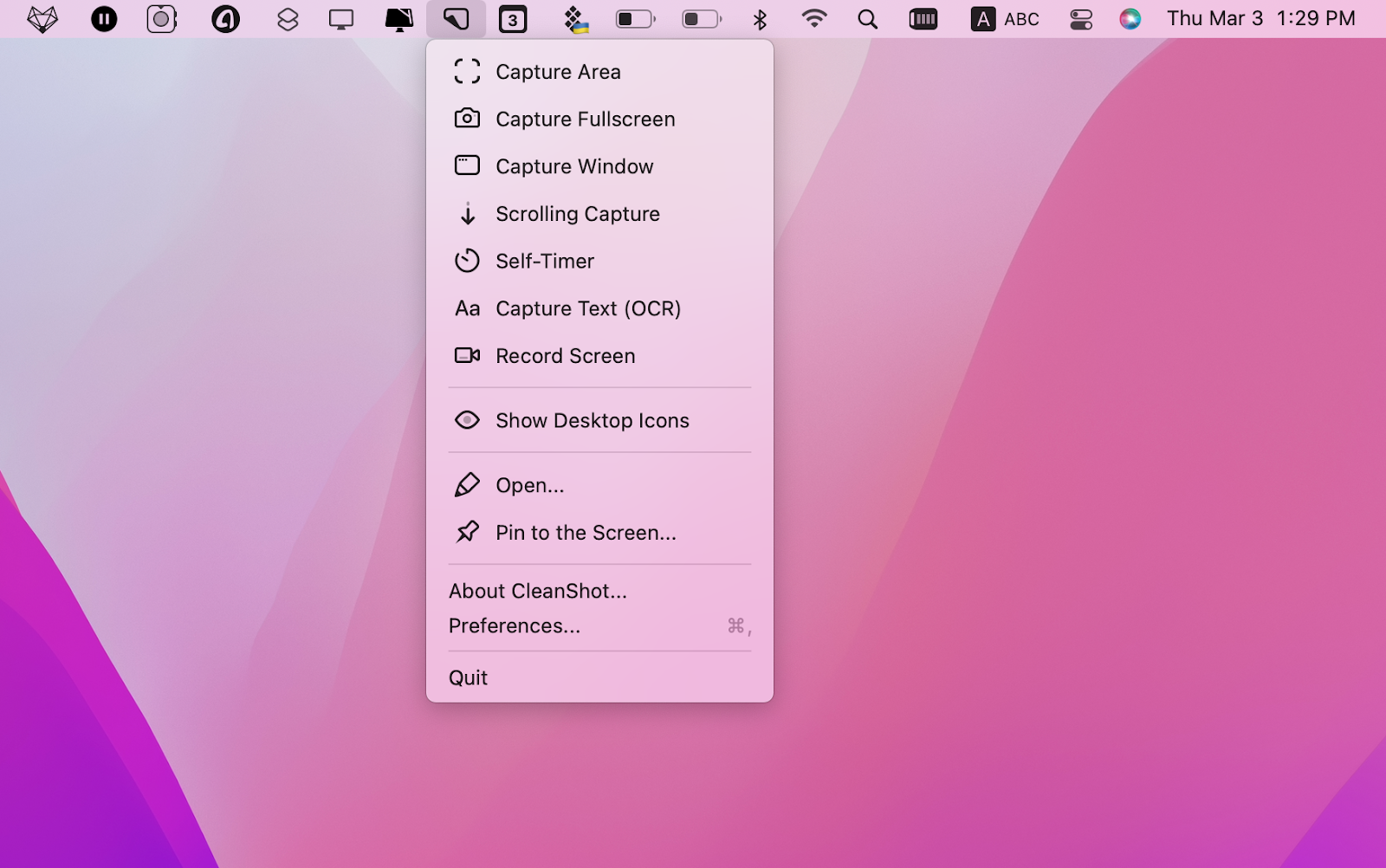 These methods are useful for various reasons. If you want to capture things quickly, screenshotting the entire screen is a great way to capture it all. If you have time to adjust a window, capturing an area of ​​the screen brings up an adjustable frame you can use to frame exactly what you want to capture. Capturing a window is great if you’re creating how-to lists and need to capture step-by-step imagery of an app.

With CleanShot X, you can also block out other things on the screen and capture only what you want by disabling desktop icons.

If you want a screen recording rather than a still photo, no app is better for recording your screen than Capto. You’ll love that Capto can hide your cluttered desktop during a recording, and allows you to annotate video in post-production. You can also snap still images with Capto and annotate them just as you would do with video. 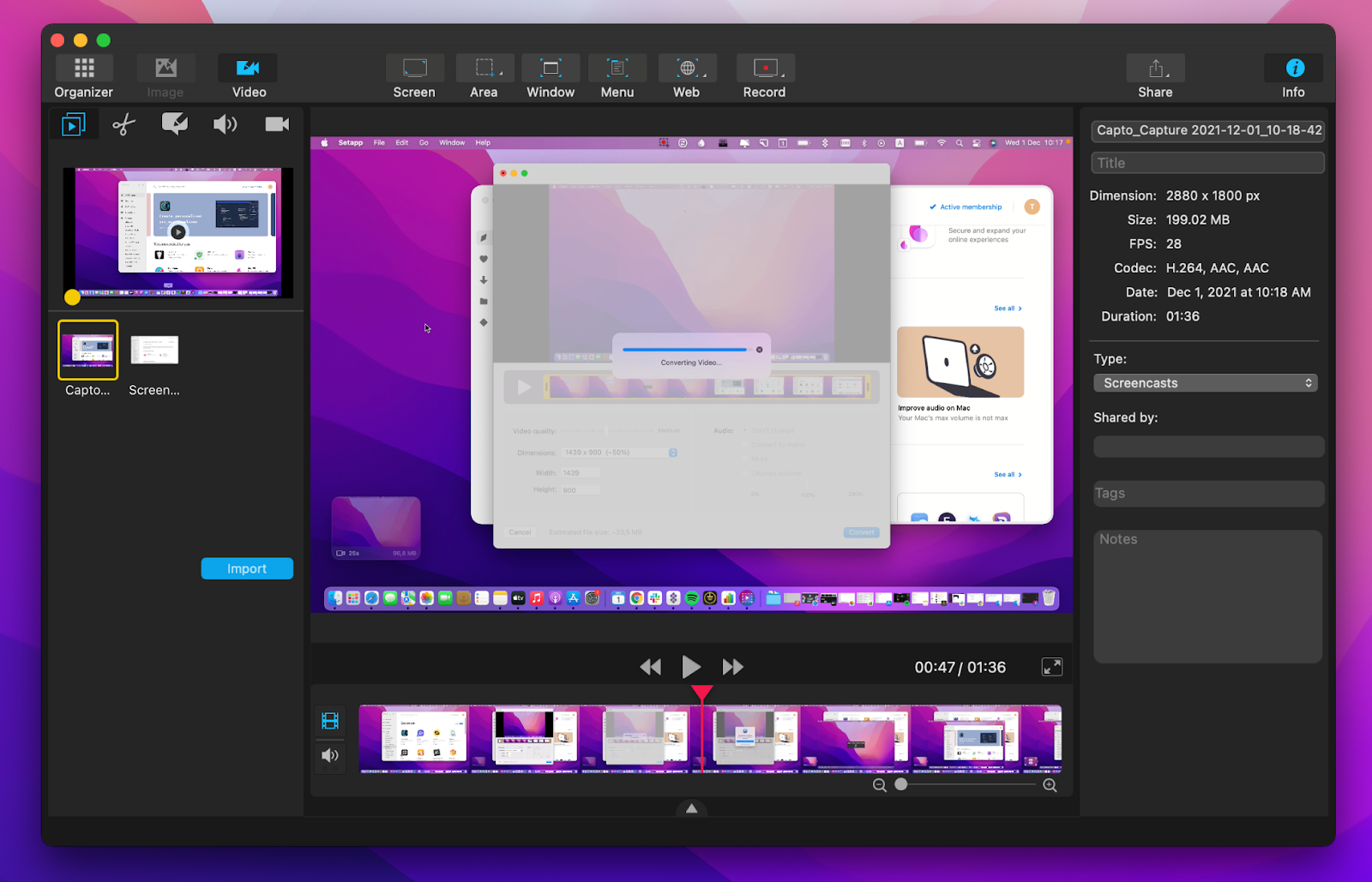 Basically, the combination of CleanShot X and Capto gives you access to the full toolkit – you can grab and save screenshots, videos, and even GIFs on Mac. Oh and both apps are available on Setapp, so you don’t have to choose between them.

Screenshot a portion of your screen

How to screenshot an entire window

It’s really that simple! Your screenshot will be saved to the destination you set, typically the desktop.

How to use built-in FaceTime camera

You can grab an image from FaceTime using the Shift + Command + 4 keyboard shortcut above! Simply follow these steps:

Your Mac will capture what’s on your FaceTime screen at the time, so be sure you’re in frame and looking your best before releasing the trackpad or mouse.

Just look at the quality of this screenshot I grabbed by connecting my iPhone to Mac. Detail really brings the power of modern iPhone camera to Mac.

Detail has AI Auto Frame, which means you never have to worry about positioning yourself in the center of the shot, Detail will do that automatically.

Sometimes you snap an image that’s just not perfect – but you don’t want to pose for another shot. When you need to do some pro-level editing quickly, turn to Luminar or TouchRetouch. Both apps offer incredibly powerful photo editing in user-friendly formats. You can blur backgrounds, enhance important details, improve color and contrast, and make any image pop with these two editing apps.

Luminar, TouchRetouch, Capto, CleanShot X, and Detail are incredible apps that are all available with a free seven-day trial of Setapp. Setapp is the world’s largest and most complete suite of productivity apps for Mac, with over 200 tools for solving your daily tasks.