Are you disappointed that you can’t use the Sidecar on your Mac and iPad? Thanks to Free-Sidecar, you can extend Sidecar compatibility to additional iPads and Mac models that are not officially supported by Apple for this feature.

Sidecar is one of the most useful features for Mac and iPad users, allowing the iPad to serve as an external display for Mac. It’s suitable for setting up a dual screen almost anywhere, whether at your desk or while you’re on the go, and it’s fantastic. One drawback of the Sidecar is that device compatibility is somewhat limited to choosing a newer model of iPad and Mac – officially, anyway. But here comes Free-Sidecar, which extends compatibility so you can use Sidecar on additional older devices.

Using Free-Sidecar includes backing up and modifying system-level files, disabling SIP, using terminal commands, and other advanced tasks, so if that doesn’t suit you, this isn’t for you. If you are ready for this, you can take the Free-Sidecar utility and see the complete guide on Github:

Obviously this is not necessary if your Mac and iPad are new enough to simply use the Sidecar officially. This is actually intended only for advanced users, who have hardware that does not normally support the Sidecar feature set, but who still want to run the software. 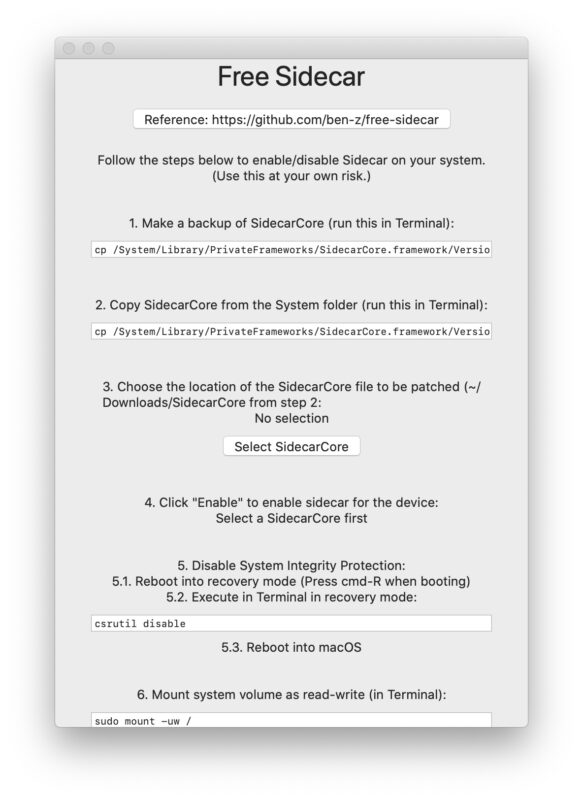 As with all software startup settings on unsupported hardware, and with all system modifications, performance may not be as good as expected, and there may be other issues. So you’ll want to make sure you back up your Mac thoroughly before you try this, and proceed at your own risk and caution.

If you use Free-Sidecar on unofficially supported Mac or iPad hardware, let us know your experiences and thoughts in the comments!

Today in the history of Apple: iPod shuffle randomly chooses our music