Last year, IBM unveiled details of its new family of Power10 processors: eight threads per core, 15 cores per chip and two chips per socket, with a new core microarchitecture, all built on Samsung’s 7nm process with EUV. New technologies, such as PCIe 5.0 for additional cards, PowerAXON for chip-to-chip interconnection and OpenCAPI for wide memory support have made the Power10 sound like a beast, but the question has always been time to market — when could customers get one? IBM’s Power10 E1080 servers, aimed directly at the cloud market, are announced today.

IBM’s Power processor series has been a steady advance over the last few decades, often using some secret manufacturing process to take advantage of that specialist frequency on the verge of bleeding. The new Power10 processor is also built for performance, with 602mm2 16-core silicon matrix running at over 4 GHz with 8 threads per core. For yield reasons, one core per chip is disabled, but a system with a full 16 sockets can run on 1920 logic threads. 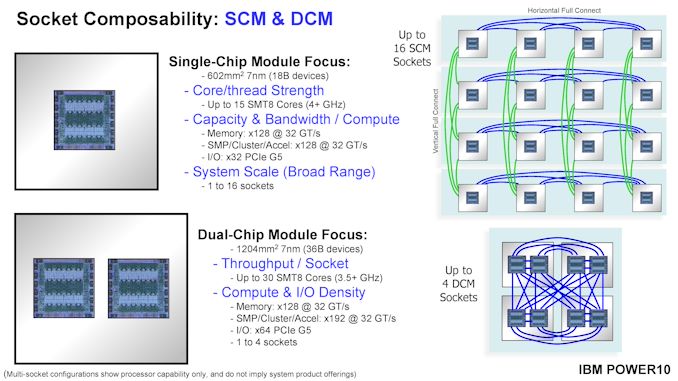 IBM built the Power10 to be either in a single-chip (SCM) module with a single piece of silicon, or in a dual-chip (DCM) module with two pieces of silicon. What really shines about the chip is the two multi-protocol interfaces around the edges of the silicon. 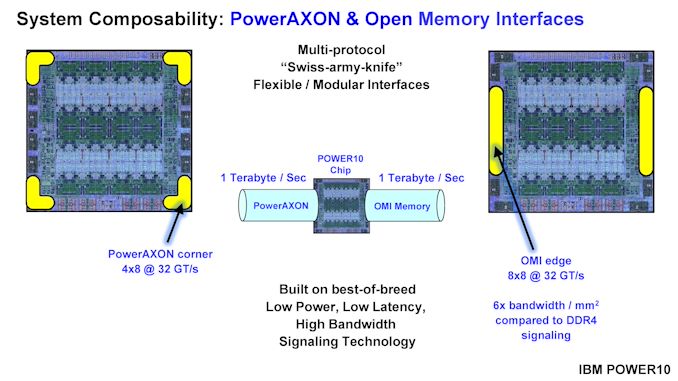 The PowerAXON in the corners and the OMI (OpenCAPI memory interface) sound like incredibly flexible interfaces. Operating at 1 TB / s, PowerAXON can be used for chip-chip communication, storage, regular DRAM memory, ASIC / FPGA connections and clustered memory. OMI can also be used for storage, or main DRAM, or for high-bandwidth GDDR / HBM. Together, these technologies enable up to 8 TB per system or 2048 TB of addressable memory in a networked system group. There is also PCIe 5.0 x32 for additional cards. 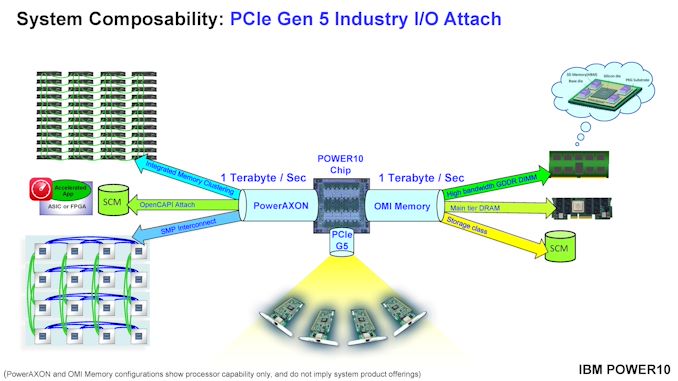 IBM compares the Power10 to the Power9: + 20% improvement in a single thread, + 30% per core improvement, and a total of 3x performance per watt with the previous 14nm processor. The package also includes a new AI computing layer that supports four 512-bit matrix machines and eight 128-bit SIMD machines per core, providing 20x or more INT8 performance per socket. 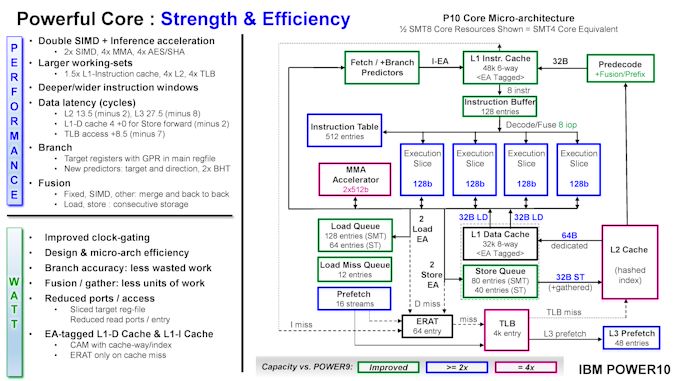 For more slides and details, check out our live blog from last year’s Hot Chips.

The aforementioned design E1080 is an eight-socket system, which supports transparent memory encryption, 2.5 times faster encryption and new RAS functions for advanced recovery, self-healing and diagnostics. IBM materials focus on one specific benchmark: how it outperforms other options in the two-tier standard SAP Hana SD standard with only half sockets, or the Oracle scale that requires only 20% power and the number of Oracle licenses to achieve the same result. 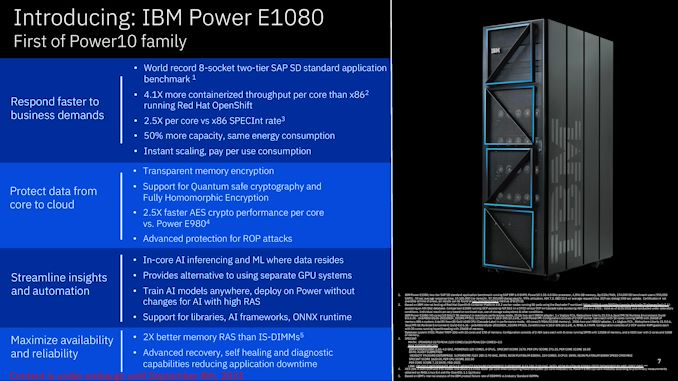 IBM has repeatedly mentioned “instant scaling, pay-per-use”, especially Red Hat OpenShift cloud technology. This all refers to IBM’s “hybrid cloud” strategy, which means that the company manages some private internal resources in the cloud, and at the same time uses the “public” resources of a cloud service provider, which is a public element related to price. IBM is launching its own cloud service, of which Power10 will be a part. 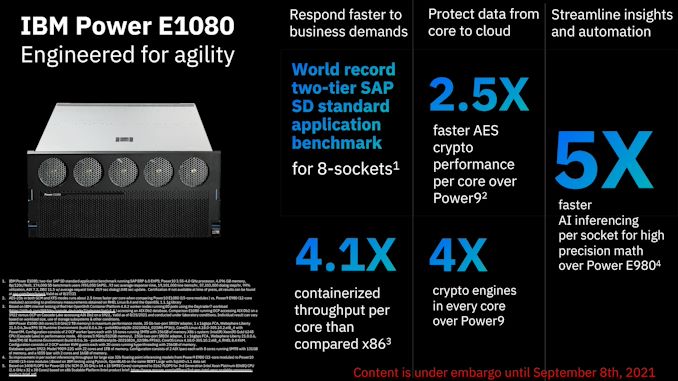 IBM has been relatively light in the details of the exact SKUs to be offered, the memory options, whether they will be available for direct purchase and implementation. There has been much discussion about new artificial intelligence accelerators with ONNX frameworks, as well as operating system support for business features such as side channel attacks, intrusion detection, compliance reporting, and full-range encryption with support for “quantum secure cryptography”.

IBM now receives orders with deliveries expected to begin before the end of the month.