If you purchase an Apple Studio Display and decide you want a different stand later, you can get it upgraded at the Apple Store, according to a new report. That’s despite Cupertino’s warning that they’re “not interchangeable.”

Pricing varies depending on the stand or mount you want and your region. It is believed the upgrade kits are only available to Apple technicians and Authorized Service Providers, so you cannot carry out the swap yourself.

Apple sells Studio Display in a number of different flavors, depending on how you want it set up. Its default stand, which is included for $ 1,599, has tilt adjustment. For the same price, you can choose a VESA mount instead.

Alternatively, Apple sells an alternative stand that offers both tilt and height adjustment. It adds $ 400 on to Studio Display’s price tag, taking the total to $ 1,999. Apple says stands are built-in, and “not interchangeable.”

“It’s important to consider your workspace needs at the time of purchase,” reads the company’s website. However, it seems that may not be completely true, according to a leaked internal memo.

MacRumors reports that Studio Display stands and mounts can be swapped and upgraded by taking the monitor to an Apple Store or Authorized Service Provider. It’s not necessary to replace the whole monitor.

“The standalone stands and VESA mount upgrade kits are only available to certified technicians and are not sold through Apple’s online store,” the report notes. And pricing depends on a number of factors.

It’s probably still a good idea to get the stand you want at the time of purchase, then – even if it adds to the cost of Studio Display. It sounds like swapping it later is likely to be more expensive in the long run.

However, if your needs change later on and you decide a different stand or mount is necessary, you’re not completely stuck with the original.

Another Studio Display tidbit that has surfaced since the device made its debut last Friday concerns its power cable. It seems that the unique connector, which Apple says you cannot remove, can, in fact, be unplugged. 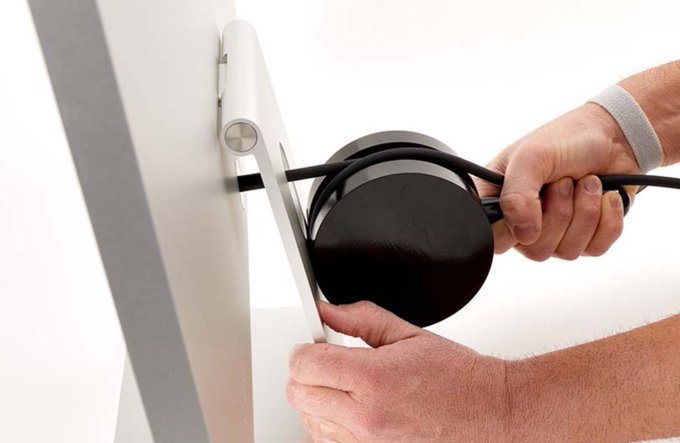 However, a special tool – seen in the tweet above – is required to safely remove the cable from Studio Display, so it’s another job only Apple or an Authorized Service Provider can carry out. Why? We have no idea.