As part of AMD’s Financial Analyst Day 2022, it has provided us with a look at the company’s desktop client CPU roadmap as we advance towards 2024. As we already know, AMD’s latest 5 nm chips based on its Ryzen 7000 family are expected to launch in Fall 2022 (later this year), but the big news is that AMD has confirmed their Zen 5 architecture will be coming to client desktops sometime before the end of 2024 as AMD’s “Granite Ridge” chips.

At Computex 2022, during AMD’s Keynote presented by CEO Dr. Lisa Su, AMD unveiled its Zen 4 core architecture using TSMC’s 5 nm process node. Despite not announcing specific SKUs during this event, AMD did unveil some expected performance metrics that we could expect to see with the release of Ryzen 7000 for desktop. This includes 1 MB per core L2 cache, which is double the L2 cache per core with Zen 3, and up to a 15% performance uplight in single-threaded IPC performance.

One key thing to note with AMD’s updated client CPU roadmap, it highlights some more on what to expect with its Zen 4 core, which is built on TSMC’s 5 nm node. AMD is expecting 8-10% IPC gains over Zen 3, on top of their previously announced clockspeed gains. As a result, the company is expecting single-threaded performance to improve by at least 15%, and by even more for multi-threaded workloads.

Meanwhile AMD’s 3D V-Cache packaging technology will also come to client desktop Zen 4. AMD is holding any further information close to their chest, but their current roadmap makes it clear that we should, at a minimum, expect a successor to the Ryzen 7 5800X3D.

The updated AMD client CPU roadmap until 2024 also gives us a time frame of when we can expect its next-generation Zen 5 cores. Built on what AMD is terming an “advanced node” (so either 4 nm or 3 nm), Zen 5 for client desktops will be Granite Ridge.

At two years out, AMD isn’t offering any further details than what they’ve said about the overall Zen 5 architecture thus far. So while we know that Zen 5 will involve a significant reworking of AMD’s CPU architecture with a focus on the front end and issue width, AMD isn’t sharing anything about the Granite Ridge family or related platform in particular. So sockets, chipsets, etc are all up in the air. 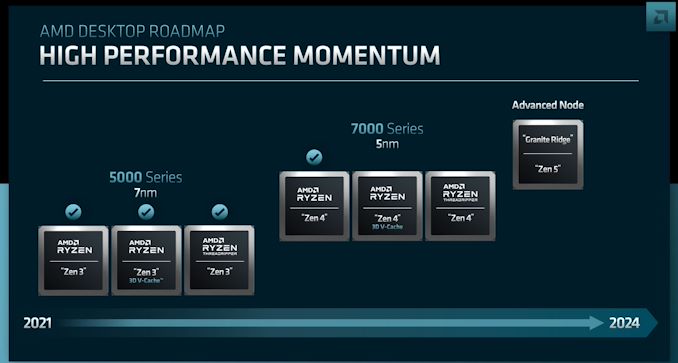 What Is a TikTok Shadowban? Plus 5 Ways To Get Unbanned
5 hours ago