One of the hottest electric vehicles at the moment is Ford’s Mustang Mach-E, and I recently had the opportunity to spend some time in the 2021 model in the first edition to test all of its features, including the SYNC 4A infotainment system on a massive 15.5- inch portrait screen with support for wireless CarPlay.

A few months ago, I practiced with the 2021 F-150 hybrid with SYNC 4, but the SYNC 4A infotainment system in Mach-E offers a rather different experience.

The Mach-E offers very few hardware controls, certainly as far as the dashboard and central assembly are concerned, with almost all vehicle functions controlled via the main infotainment display that dominates the vehicle’s interior. The only hardware control in the traditional center section is a textured volume control ring, and even it is mounted directly to the screen at a very neat touch.

The SYNC 4A infotainment system is essentially divided vertically into four sections, with a narrow top bar at the top that offers some high-level vehicle information and access to some shortcuts, the main part of the app, a card-based interface for changing functions, and a climate control section at the bottom. 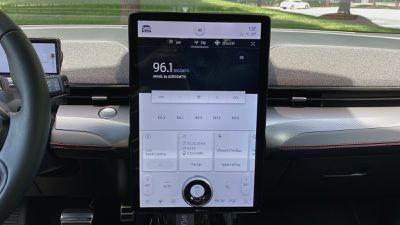 The SYNC 4A relies heavily on a card-based user interface, with a range of drag-and-drop cards that offer information on and access to features such as radio, vehicle navigation, phone, user manual and more. Touching any of them brings the corresponding full app to the main part of the screen. If you use “CarPlay”, it will take over this primary part of the screen which offers a generous amount of space, but you will still have access to the original infotainment functions on the rest of the screen. 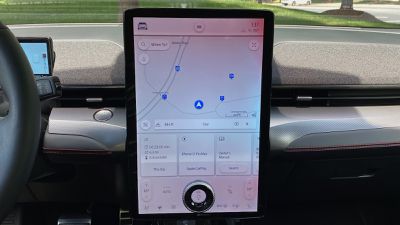 I’ve noticed many times that I’m not a fan of screen-based climate controls, so that’s a bad thing compared to Mach-E. Automatic systems, however, are becoming more sophisticated to allow you to mostly “adjust and forget” it with only occasional temperature adjustments or a temporary transition to defrost mode, for example. You can also use the built-in voice assistant to make changes to your settings without touching the screen. 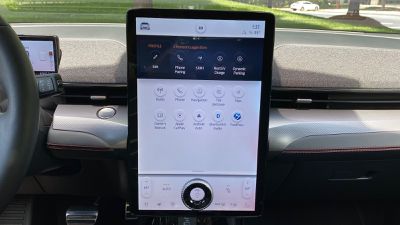 While the huge portrait screen and volume ring look very futuristic, I’m not a big fan of the overall look of the SYNC 4A system because it just seems mild to me. This smoothness is even more noticeable when you have “CarPlay” with its lively apps and icons displayed on part of the screen.

I keep telling everyone who will listen that the wireless “CarPlay” is a life-changing feature, even if you come from the wired version. The fact that “CarPlay” automatically appears on the screen without the need to take the phone out of your pocket only makes the whole experience much easier. So, even for short rides where in the past I wouldn’t bother to take out my phone and turn it on, with a wireless connection I have “CarPlay” and ready to use if I need it. 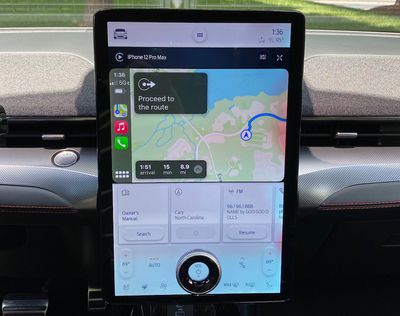 Fortunately, the wireless “CarPlay” comes standard with SYNC 4A and Mach-E, something that is becoming more common as carmakers accelerate the development of their infotainment systems in response to customer demand and rapidly changing technology. 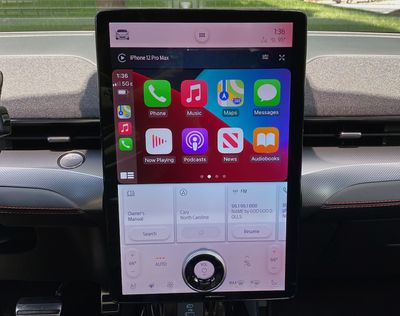 “CarPlay” is bright and vibrant on the Mach-E screen, and I like that it only takes up part of the screen so I still have access to information and controls from the home system. But even though “CarPlay” is quite large on the screen, it’s unfortunately not wide, which is a feature I’ve started to appreciate on many cars because of the much broader display of navigation apps like Apple Maps. Still, the “CarPlay” looks good and works well, and is well positioned to be visible without being too out of your sight while driving. 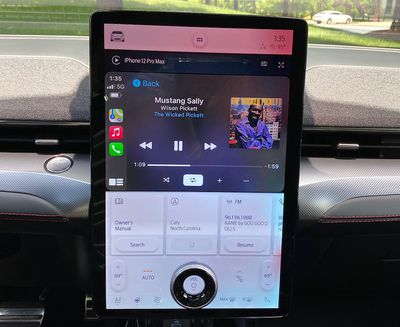 Ford also recently introduced a software update that allows “CarPlay” to take up even more of the screen, reducing the motherboard interface in the bottom row and offering a more square aspect ratio for “CarPlay”, although this feature was not available on my vehicle at the time of testing. It appears to have first appeared in new GT models before entering other versions of the vehicle.

Similar to the VW ID.4, the Mach-E doesn’t have much directly in front of the driver, as it has a minimal look that relies on a 10.2-inch screen that provides all the relevant information. 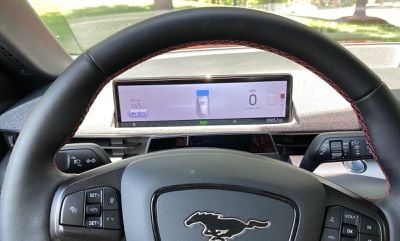 The display shows battery level and range, current speed, speed, vehicle safety data, navigation queries and more, dynamically adjusting as needed based on what is happening to the vehicle. Navigation queries on the second screen for “Apple Maps” in “CarPlay” are supported on the driver screen, offering another way to help you go in the right direction.

As with most of the rest of the hardware in the vehicle, the connection options in Mach-E are a bit rare, but you have a set of USB ports (one USB-A and one USB-C) located visibly below the center of the wired connection display. There is another set of USB-A and USB-C ports for second row passengers. 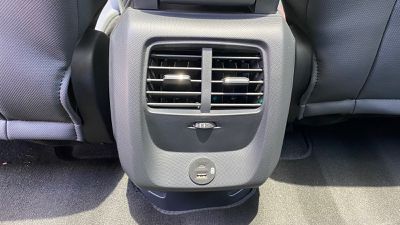 There’s also a wireless charging pad next to the front ports, located under a piece of rubber mat to prevent other objects from slipping too much. The base has partitions to separate the main basket into sections, and the area for wireless charging is large enough to accommodate the iPhone of the largest size. If you have a bulky holster, it may not quite fit. 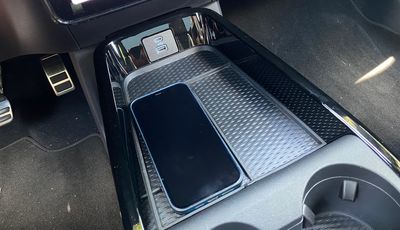 Since this is an Apple site, not an EV site, I didn’t focus on some of the main features of the Mach-E, such as the driving experience, but I’ll say it was a pleasure to drive with the fast performance you had expected from an EV of this type. Acceleration off the line was great, thanks in large part to the fact that my tester was a First Edition eAWD model with 346 horsepower and a time of 0-60 of 4.8 seconds. It’s not as fast as the new GT releases that can move that time to mid-3s, but it’s a big step forward compared to the lower RWD versions with a time closer to six seconds.

As for the SYNC 4A infotainment system and “CarPlay”, I have mixed feelings about them. The large portrait screen certainly catches the eye, but I don’t like the overall look and I wish there were still more features available as hardware controls. The portrait screen pretty much excludes the possibility of a wide screen “CarPlay” layout, but other than that, I thought it worked well with the SYNC 4A system.

The wireless connection was solid in my experience, and the wireless charging of the phone worked well with a firm grip on the charging pad, ensuring that my phone could not be misplaced while driving. Fortunately, both CarPlay and wireless phone charging are standard in all versions.

I’m glad to see that support for the “Apple Maps” guidelines in the digital cluster is reaching more and more vehicles, and Ford has done a good job of incorporating that information into the overall look of the system.